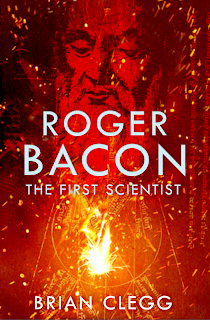 I'm delighted that my book on the thirteenth century proto-scientist Roger Bacon (now helpful retitled Roger Bacon from the old The First Scientist) is now back in print, or rather in virtualish ebook form from Kindle to iBook.

There are three fascinating things here. First there's the medieval university life, complete with murders and riots and other fun activities. Then there's Bacon's remarkable attempt to codify scientific knowledge. The ideas just poured out of him to such a degree that his original proposal - not the book, just the proposal - turned out at over 500,000 words. In it he devised the modern dictionary, used Cartesian coordinates, gave the latest ideas on optics and a whole host of other early bits of work (plus some classic misunderstandings of the period).

The final remarkable thing is the story of his attempt to write an encyclopaedia of science, faced by a ban on writing books for his religious order and problems with the pope. It had more highs and lows than a soap opera plot.

All in all, Bacon's is a remarkable story, with great insights into the early forming of science - so it's brilliant to have my book available again. Take a look at its page.


Roger Bacon was a polymath, prepared to think beyond the doctrine of the time, despite being constrained by the by the all pervading influence of religious dogma... The author’s talent for giving the reader an almost tangible feeling for the atmosphere of 13th Century Europe in general and of England in particular was marvellous – I found it fascinating.