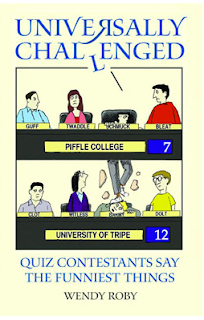 Having been on University Challenge (if only as the subject of a question) I had a natural interest in the book Universally Challenged, quiz contestants say the funniest things. It was a slight let down that most of the contents have nothing to do with that august BBC 2 quiz show, featuring rather less academic ventures, but it doesn't stop the responses being entertaining.

What we have here is a whole stream of wrong answers from the downright dumb to the entertainingly wacky (I particularly liked 'What insect is commonly found hovering over lakes?' - 'Crocodiles.')

Admittedly there were a few questions where I doubted the selection, because the answer made too much sense. There was, for instance, 'Name a place where you take your clothes off beside home?' to which the apparently funny answer was 'School.' Now, I can see why this was considered funny, but in fairness to the contestant it was also correct - most people have taken off clothes at school to change into games kit. But even these doubtful questions were interesting because it meant you could feel superior to the editor of the book, Wendy Roby, because you know better than she did.

I read the whole thing through while on holiday, which was possibly a mistake, as apart from the truly hilarious and wildly eccentric answers, it could feel a little flat, reading question and answer after question and answer. It may be it's a better book to dip into - perhaps to keep beside the loo. But there is no doubt that it makes a great combination of entertainment and mind boggling at humanity's ability to get it wrong - and it would make an ideal gift.

You can see more and buy it at Presents for Men (amongst other presents that really could be for anyone, not just men).