Tread carefully in the mindfield 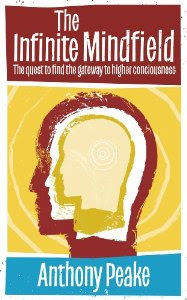 I was excited to get my hands on Anthony Peake's new book The Infinite Mindfield, as I had found his previous title taking a scientific approach to life after death intriguing - and there are parts of the new book I found equally excellent. I was fascinated to learn more about the pineal gland, about which I had very little idea, apart from knowing of the now dismissed idea that identified it as a kind of withered third eye. It is particularly fascinating that the gland can contain piezoelectric crystals that in principle mean it could act as a kind of natural radio receiver. There were also other parts of the book about the nature of light, zero point energy, hallucinogenic drugs and more that were very approachable. Peake has a great way of making you really think about a subject, rather than just take in a set of facts. However there were other sections that I have problems with.

The overall approach that I felt unsure with was the lack of selectivity. Everything from the outcome of detailed scientific study to the made up meanderings of the likes of Madam Blavatsky and Rudolf Steiner are presented on exactly the same level as if they are all true. Totally unsubstantiated concepts like chakras, based on the concept of an 'energy' that has never been detected and that has no physical basis are stated as if they are simple fact. I think the first section of the book, which looks at various religions (through to less well established concepts like theosophy and anthroposophy) is genuinely interesting, but I would have been much more comfortable if the various beliefs were stated in terms of 'this is what these people believe based on no verifiable evidence' rather that stating the beliefs, however unlikely, as if they were on a par with scientific discovery. (I've checked with the author, and this wasn't the intent, but it is how it came across to me.)

The other side of the book I have issues with is the way some fringe science is presented as if it is on a par with proper, peer reviewed discoveries. So, for instance, we hear of Luc Montagnier's assertion that DNA in one test-tube can influence pure water in another test-tube and turn it into more DNA. We are told 'Montagnier thinks that this suggests that DNA emits its own electromagnetic signals that imprint DNA's structure on other molecules.' Peake points out that it is telling that even a 'Nobel Prizewinning scientist is not immune to being labelled a "pseudoscientist" if he decides to apply his knowledge and experience in areas that are labelled "fringe" by the modern equivalent of the Inquisition, the "thought police" who hide under the term "sceptics."'

I have a number of problems with this. Just because someone is a renowned scientist does not mean he can't be totally ignorant outside his field - there have been plenty of examples of this in the past. And Montagnier, a medical doctor, is hardly qualified to deal with physics. Just think what he claims is happening. In order to transform water into DNA you would have to turn the elements hydrogen and oxygen into nitrogen, carbon and phosphorous. So this is not just a matter of 'imposing structure' - you would have to produce nuclear fission and fusion using only a 'weak electromagnetic field'. To say this doesn't make sense is an understatement. It is not unreasonable, or Inquisition-like to be sceptical in the face of such a claim.

Finally, I am a little concerned when Peake spends quite a while telling us how 'mainstream scientists have dismissed the vast majority of [DNA] code as being useless.' This might have been true 30 years ago, but since the development of epigenetics I can't imagine there are any biologists who think that what used to be labelled 'junk DNA' is useless. It is entirely recognised by mainstream science that much of this DNA has plenty of functionality.

So my problem with this book is mostly a failure to distinguish, sometimes between analogy and reality - so assuming the use of terms like 'energy' and 'light' when applied in an illustrative manner makes them the same as real energy and light - and sometimes not distinguishing between made up ideas and scientific theories, or between anecdote and data. There is plenty of good stuff in there, and if you can read the book in an appropriately selective manner it is both enjoyable and informative - but I suspect many readers will struggle to make that distinction. I am reminded in some ways of Chariot of the Gods - there is a similar logical, informative and entertaining approach, but also a similar lack of distinction between science and beliefs. A curate's egg? Definitely. But one I enjoyed nevertheless.

See more at Amazon.co.uk and Amazon.com