A pun-ishing yet pleasant read 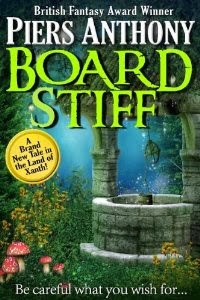 There is a long tradition of humorous fantasy that has followed two broadly diverging paths - a more sophisticated route in the UK (typified by Terry Pratchett and Douglas Adams, whose writing, though apparently science fiction could probably be more accurately classed as fantasy) and a rather less subtle approach in the US.

This American genre varies from the hugely entertaining Amber stories of Roger Zelazny (which are primarily adventures, but maintain the wry humour of a noir detective story) to downright silly but fun romps like Bring Me the Head of Prince Charming (also by Zelazny). But I had not realized quite how far these books could go in intensity of groan production until coming across Board Stiff.

The book was written by Piers Anthony, a long standing member of the SF and fantasy community who may never have been quite in the first rank, but has turned out many readable tales over the years. It was, I admit, with some trepidation that I approached the book when it was offered to me as it is number 38 (no, not a typo) in the Xanth series of novels. It really is hard to imagine someone reaching that number without churning them out (with the exception of Pratchett), but I was willing to give it a go, having been assured that no previous knowledge of Xanth was required.

Overall the experience was surprisingly pleasant. What we have here is a classic quest story, with a likable cast of characters and some impressive tasks to achieve and obstacles to be overcome. I particularly liked the character Astrid, a basilisk in human form, struggling with the conflict of wanting to taste humanity while being deadly to the species. But there is a price to payment which is coping with the numerous puns that litter the book. Practically everything we meet is a pun of some sort, from the strong drink boot rear, to the central character Irrelevant Kandy, who is either ignored if known by her full name, or lusted after if known as I Kandy. Even the central arc of the story concerns puns and their importance to Xanth.

Kandy's name also brings out the other slightly cringe-making aspect of the series, which is a 1950s-esque coyness about sex, which has been codified into a complex running joke. (Babies, for instance, really are brought by the stork, and the sight of a girl's panties causes any man to freeze in his tracks and remain comatose until snapped out of it.) Combined with a very simplistic writing style this will put a fair number of readers off, though I found it tolerable as long as the book is read with the same sort of 'dated approach' mental filter you have to apply now when reading, say, Asimov's Foundation series.

Overall, an enjoyable, lightweight way to spend a few hours. Unless you are true pun-head it is unlikely to give more than passing amusement, but it is, in the manner of the Earth in Hitchiker's Guide to the Galaxy, mostly harmless.

Board Stiff is available from 6 January 2014 and can be pre-ordered before then on Amazon.co.uk and Amazon.com.
Using these links earns us commission at no cost to you