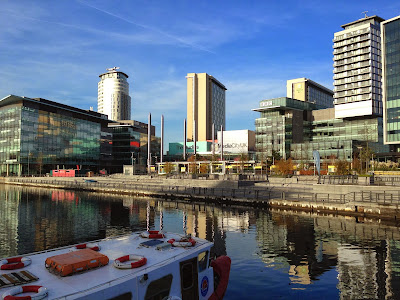 Earlier this year I was surprised and delighted to be the answer to a question on University Challenge, the venerable and much-loved quiz show, so I was even more filled with jollity to be asked to appear on the Lancaster team for the Christmas edition of the show, which features graduates with a little more experience of life, the universe and everything, rather than the usual youths. The format otherwise, though, is the same, down to the sizzling quizmastership of Jeremy 'Take No Prisoners' Paxman.

The result of the invitation was a trip to the ITV studios in the glossy new MediaCity development that has transformed the old Salford Docks into something rather glamorous. Across the water, Coronation Street actors smoulder on their new set, while in the main development BBC and ITV come together in a friendly merge that is somehow well reflected in the way ITV makes University Challenge for its old rivals.

MediaCity is worth an exploration in its own right - and we were staying in the Holiday Inn that is right in the middle of the complex - but inevitably the highlight was the filming of the show itself. I was one of the less experienced of the contestants when it came to TV, but even old hands were a little nervous at taking part in such an institution. In total there were 14 teams taking part, of which 4 would go through to the semi-finals, representing a handful of Oxbridge colleges and some of the more modern institutions.

I can't deny I was nervous, but when it came down to it, it was great fun. Our team genuinely enjoyed it in the good old British sense of 'it's the taking part that counts', so win or lose, we were in it for the enjoyment. This helped hugely by the make up of the team - brilliant people one and all. Apart from me, Lancaster was represented by the Daybreak news presenter Ranvir Singh, the film actor (also about to be in Games of Thrones) Roger Ashton-Griffiths and the food critic and TV food judge Matthew Fort. I can say nothing about the result - but we had a truly brilliant experience (probably best of all socialising over a meal afterwards).

If you want to see Christmas University Challenge in action it starts tonight, Friday 20 December, on BBC2 at 7.30pm. Our match against the University of Kent is on tomorrow night, 7.05pm, again on BBC2.
BBC Christmas fun ITV quizzes TV