Thinking on your feet when the ground is rolling under them

December 06, 2013
Here's another guest post from Richard Sutton, who introduces himself: From San Rafael, California on a windy January in 1952, it's been a wild ride. My folks never settled down until long after I'd moved to a cabin I built on a commune in Oregon, but I couldn't sit still -- the wanderlust was in my blood. After college,  I hitchhiked to New York City in 1973. There I met my wife on Canal Street and finally found a home.

I learned my first craft post-college, spending 20-plus years in the trenches of NYC advertising and publicity as a graphic designer, marker-pen-jockey, art director and copy writer. I served the needs of a wide range of clients from corporate multinationals to non-profits and small retail businesses. I now limit my design and marketing work to book covers and collateral marketing for authors. Somewhere in there I began writing fiction and short stories and began trading in authentic American Indian arts. My first novel, The Red Gate, was released in 2009 and three more have followed. The most recent, Troll, is a fictional look at the origins of racism and fear of outsiders in a pre-historic setting. 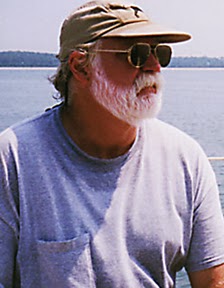 A number of years past, I was struggling to design a web presence for our family business. It was 1995, and despite my more than twenty years of commercial communications design cred, it was eluding me. Each time I’d lay the elements upon the new page, something would draw my attention and once I returned, it resembled a heap of blocks after a child’s tantrum. Images, blocks of text, graphs and charts, lying in an uncertain, unrestrained heap at the bottom of a seemingly endless page.

I browsed hundreds of sites. Many were rough piles, just like my work. The few with order and sense, were composed mostly of images with little information. I would click away on each image, but none were linked to anything, so I wondered what the point was. Possibly, it was the frustration of these displays of color and form with no underlying meaning that led me to a realization.

Like all designers whose work occurred upon some form of printed page, the only thing we knew was producing communications to be seen in two dimensions. Flat. Linear. Page-wise. These static examples viewed on a screen were an attempt to utilize the existing, rudimentary tools in the html codes, to create sophisticated displays in a new environment. They were two-dimensional thinking stuck in cyber space. Nothing I had learned up to this point prepared me to think in more than two dimensions at once when designing communications tools such as advertising, etc. I had grown up in the universe of magazines, newspapers and books. Package design, even when properly die-cut and assembled, was still created in two dimensional thought space. Up until then, a message would be found, essentially in one place. Digested and absorbed in the same place it was conveyed. A single meal. One-stop.

The world-wide-web (as we thought of it then) required a new way of thinking about presenting information. A technology – print – that had served admirably for hundreds of years, was being eclipsed by something still evolving. It was hard to get a grip on its expanding form, let alone the language that described how it worked.

I slowly learned to use basic html coding, which seemed to reinvent itself every few months. Thus, my good old tool-kit, which contained the most modern forms of really archaic devices, was no longer of value.  Messages were now evolving, adapting things. One-stop was no longer enough. It was more about how long you could hold someone’s attention while introducing new concepts tied into the original message, even if it took them outside and off your point of origin. Effective web communications needed to go somewhere and bring the reader along with it. Designers had multiple dimensions to consider, now: multiple venues at once. Showtime took on a completely new and terrifying meaning as it wasn’t just your own lines or even your own set that could trip you up.

The parameters of what could be done online changed as fast as new technology was introduced. Keeping current became impossible for me, so I learned to stay conversational with the last “current edge”.

Which is where I have remained. I turned away from implementing the newest bells and whistles in my work, to sticking with the primary goals and messages to reach the market segment. One thing I’ve learned to do which before seemed counter-productive, is to view competitors and other connected interest sites as where the edge of my own sites lie. A message I might want to share now has a really wide, tall, deep range of places it can connect with and be reinforced with.

Oddly enough though, the market is not keeping up with the expansion of the message. No. Now, because of the way visit and selection data is fed into huge databases, the most effective marketing is to the narrowest possible slice of market. I’ve learned – and it hasn’t been easy – that I don’t want everyone to see my message at all. No, I only want to make contact with those niches of potential market that are most likely to respond positively. It makes the process so much more meticulous and consigns the “touchy-feely” part of marketing design into little, narrow file folders with very specific titles.

When I began to write fiction for eventual publication, it got even harder to figure out which hat to wear for the job. The marketing of books, especially, has become a much more scientific, data-driven process than it was in the ”Golden Age” of Publishing and Advertising, even as recently as the 1990s. As the means to get a story to its readers have evolved and morphed into a distinctly different process than the publicity plans of the ancients, even the material conveyed has changed. Now a novel, running 450 pages in print on paper, can be delivered to a reader for zero actual cost, beyond the bandwidth needed to transmit the data. No paper, no ink. No warehousing. No shipping. No returns… well few returns.

Today, most marketing efforts for books consist of finding the most receptive slice of market, then making sure that the product is set there in plain sight, as invitingly as possible, including in most cases, sampling before buying as well as interconnected referral networking. Back in the day when I was just getting on my feet as a designer, if you could set up the back page to get them to turn the book over again and open it, you had succeeded.  What an amazing change. If you want to remain thinking on your feet now, you’d better grow several additional ones, as two just won’t cut it anymore. I’m learning the dance, but the steps are complicated!

Find out more about Richard's books at his website.