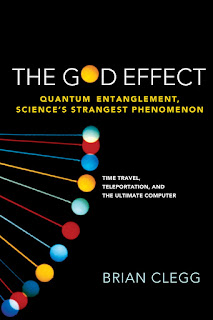 I was asked to go on the BBC Radio 4 today programme the other day to talk about the Chinese quantum entanglement satellite (you can hear the interview here) - a number of people said it was interesting, but they really didn't get the whole entanglement thing.

I thought it would be worth sharing part of the first chapter of my book The God Effect below. Incidentally, I also get curiosity about that title (which has done the book no harm). It has a rather obscure heritage. When physicist Leon Lederman wanted to write a book about the search for the Higgs boson, he wanted to call it The Goddam Particle, as the Higgs was so elusive. The publishers wouldn't let him, so they compromised on The God Particle. I justify the book's title because at the time was there some talk about entanglements between Higgs bosons and other particles. But in reality it was because entanglement is - in Einstein's words - spooky. I think it has a certain ring.

The phenomenon at the heart of this book is a linkage between the incomprehensibly small particles that make up the world around us. At this quantum level it is possible to link particles (photons, electrons and atoms, for instance) together so completely that the linked objects become to all intents and purposes part of the same thing. Even if these entangled particles are then separated to opposite sides of the universe they maintain this strange connection. Make a change to one particle, and that change is instantly reflected in the other – however far apart they may be. Entanglement has an unsettling omnipresence.

It is this unbounded linkage that leads to the remarkable applications of quantum entanglement that are being developed. It enables the distribution of a secret key for data encryption that is impossible to intercept. It plays a fundamental role in the operation of a quantum computer – a computer where each bit is an individual subatomic particle, capable of calculations that are beyond any conventional computer, even if it ran for the whole lifetime of the universe. And entanglement makes it possible to transfer a particle, and potentially an object, from one place to another without passing through the space in between.

This counter-intuitive ability of entanglement to provide an intimate link between two particles at a distance seems just as odd to physicists as it does to the rest of us. Albert Einstein, who was directly responsible for the origins of quantum theory that made entanglement inevitable, was never comfortable with the way entanglement acts at a distance, without anything connecting the entangled particles. He referred to the ability of quantum theory to ignore spatial separation as “spükhafte Fernwirkungen”, literally spooky or ghostly distant actions, in a letter written to fellow scientist Max Born:


I cannot make a case for my attitude in physics which you would consider reasonable… I cannot seriously believe in [quantum theory] because the theory cannot be reconciled with the idea that physics should represent a reality in time and space, free from spooky actions at a distance.

Entanglement, as a word, seems to have entered the language of physics at the hand of German scientist Erwin Schrödinger, in an article in the Proceedings of the Cambridge Philosophical Society. Although German, Schrödinger was working and writing in English at the time – interestingly, and this may have inspired his use of “entanglement” – the German word for the phenomenon, Verschränkung, has a rather different meaning.

The English term has subtly negative connotations. It gives a sense of being out of control and messed up. But the German word is more structured and neutral – it is about enfolding, crossing over in an orderly manner. A piece of string that is knotted and messed up is entangled, where a carefully woven tapestry has Verschränkung. In practice neither word seems ideal. Quantum entanglement may lack the disorder implied by “entanglement”, but it is much stronger and more fundamental than the pallid Verschränkung seems to suggest.

For Einstein, the prediction that entanglement should exist was a clear indicator of the lack of sense in quantum theory. The idea of entanglement was an anathema to Einstein, a challenge to his view on what “reality” truly consisted of. And this was all because entanglement seemed to defy the concept of locality.

Locality. It’s the kind of principle that is so obvious we usually assume it without even being aware of it. If we want to act on something that isn’t directly connected to us – to give it a push, to pass a piece of information to it, or whatever – we need to get something from us to the object we wish to act on. Often this “something” involves direct contact – I reach over and pick up my coffee cup to get it moving towards my mouth. But if we want to act on something at a distance without crossing the gap that separates us from that something, we need to send an intermediary from one place to another.

Imagine that you are at throwing stones at a can that’s perched on a fence*. If you want to knock the can off, you can’t just look at it and make it jump into the air by some sort of mystical influence; you have to throw a stone at it. Your hand pushes the stone, the stone travels through the air and hits the can; as long as your aim is good (and the can isn’t wedged in place), the can falls off and you smile smugly.

Similarly, if I want to speak to someone across the other side of a room, my vocal chords vibrate, pushing against the nearest air molecules. These send a train of sound waves through the air, rippling molecules across the gap, until finally those vibrations get to the other person’s ear, start her eardrum vibrating and result in my voice being heard. In the first case, the ball was the intermediary, in the second the sound wave, but in both cases something traveled from A to B. This need for travel – travel that takes time – is what locality is all about. It says that you can’t magically act on a remote object without that intervention.

All the evidence is that we are programmed from birth to find the ability to influence objects at a distance something remotely unnatural. Research on babies has shown that they don’t accept action at a distance, believing that there needs to be contact between two objects to allow one to acton the other.

This seems an extravagant assertion. After all, babies are hardly capable of telling us that this is what they think, and no one can remember how they saw the world in their first few months of life. The research technique that gets round this problem is delightfully cunning. Babies are made bored by constant repetition of a particular scene, then after many repeats, some small aspect of the scene is changed. The babies are watched to see how they react. If the new movement involves action with contact, the babies get less worked up than if it appears to involve action at a distance. The inference that babies don’t like the ability to act remotely is indirect, but the monitoring does appear to display babies’ concern about action at a distance – the whole business feels unnatural.

Next time you are watching a magician at work, doing a trick where he manipulates an object at a distance, try to monitor your own reaction. As the magician’s hand moves, so does the ball (or whatever the object he is controlling happens to be). Your mind rebels against the sight. You know that there has to be a trick. There has to be something linking the action of the hand and the movement of the object, whether directly – say with a very thin wire – or indirectly, perhaps by a hidden person moving the object while watching the magician’s hand. Your brain is entirely convinced that action at a distance is not real.

* In the original draft of the book the example was a coconut shy, but the US publisher had never heard of them.