Why I don't read graphic novels 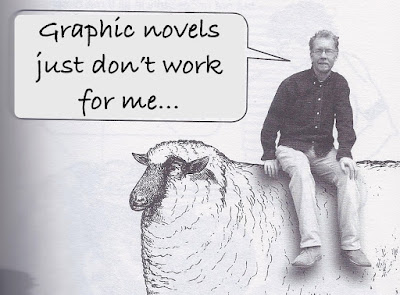 In a recent Facebook discussion of the Amazon Prime TV version of Neil Gaiman's American Gods, someone commented that he thought the book wasn't as good as Gaiman's graphic novels, and I had to reply that I don't really do graphic novels.

This isn't snobbery, but rather a reaction to three things.

One is I'm not very visual, so I tend to prefer the written word to illustrations. Secondly, many graphic novels (I admit, not all) feature superheroes and I do think that the whole concept of superheroes is juvenile. The only superheroes I've ever really related to were Buffy (et al) and the drunken one that Will Smith plays in a movie whose name I can't remember. And I suspect they mostly appeal because they entirely subvert the genre.

Finally, the problem I have with graphic novels is their pared-down nature. There is no opportunity for long, interesting conversations or intriguing exposition. It all has to fit in a speech bubble or a box. It's like reading in text speak, where I want the full effect.

So if you're a graphic novel fan, please don't think I'm doing you down. I'm delighted that you enjoy them. I pretty well only listen to prog rock and pre/post-classical music, so I'm in no place to criticise other people's tastes. I just wanted to explain why it is that they don't work for me.
books comics graphic novels novels superheroes