Many years ago when I was running the Emerging Technologies unit at British Airways, I was fascinated by an Apple video featuring a computer of the future. It was called Knowledge Navigator. The screen opened up like a book. It was all touchy-feely. You used it for video calls. It acted as a PA, reminding you of appointments (and putting off your mother's phone calls). It was just wonderful.

In one segment it demonstrated how data might be accessed in the future. The user, an academic, talked to the Navigator, saying he wanted to see data on the shrinking of the Amazon rain forest, then wanted to get data on the growth of desertification in North Africa. Then put the two together to produce an interesting (if scientifically doubtful) presentation show visual correlation between the two as they visibly changed over time.

I SO WANTED ONE. I hadn't thought about the Knowledge Navigator for years until I came across Wolfram Alpha. This is a new style search engine, just launched, that seems to promise the sort of flexible data presentation that the Navigator offered. You ask for some information in free text and it goes away, pulls it together and presents it for you.

I had three attempts with Alpha. The first, trying to recreate the Knowledge Navigator demonstration was a failure. The data requirements were just too complex. I couldn't get it to understand what I wanted.

Then I tried something I desperately wanted to know when writing a book a few years ago. What was the weather like in San Francisco on a particular date in history? So I entered weather in San Francisco 17 October 1874. The first time I pressed the 'go' button was not promising. I got this:

Then I tried again and got this: 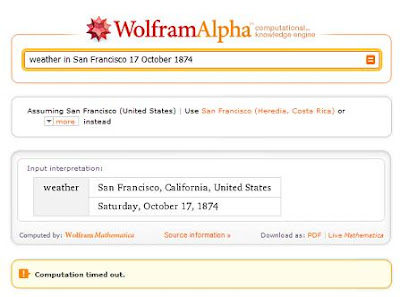 it had managed to parse my request okay, but then spent too long scratching its head as to what to do with it.

Finally I tried a third piece of information I wanted more recently. A plot of the FTSE 100 share index between March 2008 and February 2009. This had been quite tricky to get hold of - but this time Alpha shone and whipped it up for me in no time.

So Alpha may not be the ultimate data-based search engine yet - and certainly isn't Knowledge Navigator - but it has promise.