Still in love after all these days

So, nearly two weeks on from going iPhone, it still has a central place in my affection. It just does so much so well. I was watching an old Star Trek yesterday, and noticed their communicators (if you ignore the flippy bit) were similar in size to an iPhone - but you never see Spock taking a photograph or Chekov on Twitter. They just weren't in the same league.

A lot of the joy comes from the apps. I just want to briefly get excited about one - Shazam. I know that there are similar apps on other phones, but Shazam works so neatly. Play a recording into the phone and (with any luck) it will recognize it. This even works if you haven't got a signal - it will store it away until you do. 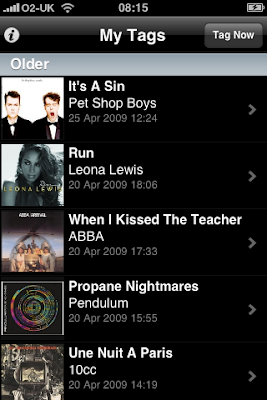 But it's more than a matter of recognizing it - you get links to iTunes to download it, a link to YouTube, a discography... it provides what you might need, the way you might need it. The links to iTunes are particularly appealing - this means that the application can be free, because its makers are going to make some money out of it - but the user doesn't lose out either.

If you want a song you've heard, you can get it, easily and cheaply. Magnificent. 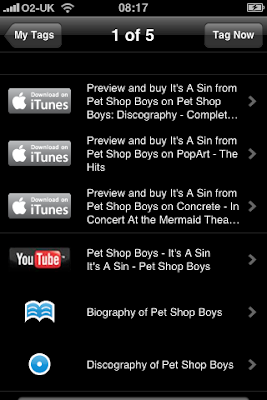 I ought to say that the tracks featured in the screen shots were just random ones picked off the radio - they don't reflect my musical tastes, with the exception of one that was from my PC. It will be left as an exercise for the reader to guess which.