Travels with my iPhone 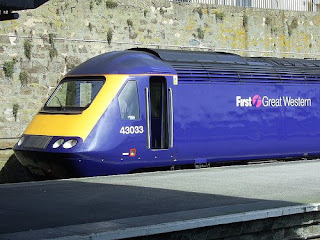 I was on a visit to London yesterday to give a talk at St Margaret's School in Hampstead.

The much maligned railway performed magnificently - the trains were on time, I got a seat both ways, and there was some constructive fiddling at Didcot station to save me money. I was coming back in the peak, so the natural thing was to get an any time return. But the cunning person at Didcot issued me an off peak return/travel card for the tube, plus a single to return in the peak - saving a magnificent £4. Okay, it wasn't a fortune, but I would have been none the wiser if I hadn't been offered it.

The iPhone's rail information app did its job on timetable details, underground trains appeared as if by magic as I arrived on the platform, and I was soon disgorged in Hampstead, often described as 'leafy' Hampstead. There were a lot of trees in the street, but from my viewpoint it was more 'maze-like' Hampstead. The route from the tube station to the school was a real tangle, with no obvious straight line route in sight. Plus, the station itself is on the corner of a conjunction of roads, and I hadn't a clue which way I had to go.

I was a bit dubious about using the maps function on the iPhone, because I thought I would look something of a plank, navigating around the place with a phone - but it worked beautifully. I asked for a route from where I was to the school's address (lifted effortlessly from my address book) and off it went, guiding me on a wiggly route including a pedestrian only section that seemed to minimize the distance. The only thing it got wrong was the naming of one road, but it was obvious from the locator on the map where I was.

I found it surprisingly easy just to glance at the screen to confirm my heading without even breaking stride - it worked much better than expected. The only problem I encountered was that I had not powered down my iPhone for many days, and this seems over time to make it harder to pick up a 3G signal, needed to display new maps. Once I'd switched it off and on again it was fine, but for a while I was cursing Hampstead as being 3G-proof (though I did manage to snaffle a WiFi connection from someone's house as I passed).

I had intended to listen to a podcast of last Friday's News Quiz on the way back on the train, but I ended up in the quiet carriage, so instead used recently installed Stanza to read part of The Time Machine on the iPhone, which worked better than I expected. Entertainment was also provided by a very chunky chap opposite, who was juggling an iPhone and a Blackberry, frantically interacting with both. It was almost street theatre.