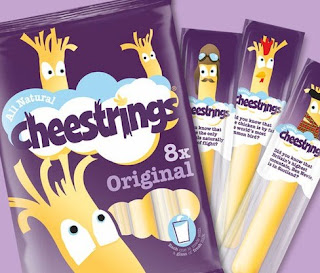 Regular readers will be aware that I'm fond of choral music, especially Tudor, Elizabethan and twentieth century. Over the last couple of weeks I have been listening to more Classic FM than usual, because they play a lot of Christmas music, and as a result I have been exposed to something called 'Howard Goodall's Enchanted Voices.'

To me, comparing this music to a good choir singing great choral music like Byrd, Sheppard, Howells or Leighton is just liking comparing cheese strings to a good mature cheddar or a magnificent stilton.

Let's see why. Cheese strings are highly packaged - and so is Enchanted Voices. It's not really clear whether this is the name of a group or a sound - it's just a package, really. Cheese strings are processed cheese - this is processed singing. It's either has artifical reverb added, or it's recorded in an acoustic that sounds very artificial. And then cheese strings have a very limited texture and a single trick of being peelable. Similarly, Enchanted Voices are just sopranos, lacking the full texture of a four part choir, and have an unremitting hard tone. I think it's supposed to be crystalline, to suggest enchantment - I just find it grating.

Now of themselves, cheese strings aren't evil. If they get people into cheese, and as long as they move on as they mature, that's fine. But if adults eat cheese strings after a meal (say), something has gone wrong. Similarly, I don't mind Classic FM using Enchanted Voices to get people into choral singing - but for goodness sake, please move on to the real thing!
church music classical music music