The terrible science of Dan Brown's The Lost Symbol 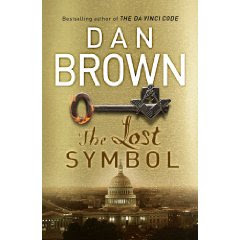 If you aren't familiar with this sport, Dan Brown's books regularly depend on science for their plots - but often get it entertainingly wrong. My all time favourite is Digital Fortress (see at amazon.co.uk: Digital Fortress/amazon.com: Digital Fortress). The entire plot of this book depends on something that Brown  has his characters repeat over and over - it is impossible to create an unbreakable cipher. Unfortunately, not only is it possible, they have been around for nearly 100 years, so poor research there, Dan.

Angels and Demons is also replete with poor science (see at amazon.co.uk: Angels and Demons/amazon.com: Angels & Demons). What makes this book (and successors) particularly entertaining is that Brown starts the book with a section labelled 'FACT' - and much of the science in that section, particularly about antimatter, is painfully wrong.

But we're getting distracted from The Lost Symbol. Here, Brown lays himself wide open by putting in his FACT section 'All rituals, science... in this novel are real.' Bring it on. I'd like to start with a touch of piquant being too clever for your own good. He makes a big point that someone is using an iPhone. Trendy, huh? But then he shows a text from that iPhone - and clearly this is wrong. Why? Because every sentence begins with lower case letters. iPhone texting automatically makes the first letter of a sentence uppercase - is our Dan really suggesting that the character, hurriedly texting, went out of their way to set each starting sentence letter to lower case? Nope, he's just not used an iPhone.

We also get the old chestnut that the soul has a weight that can be detected leaving the body on death - sorry Dan, that's been pretty well disposed of. Oh and while we're on the subject of old chestnuts, he also implies that in medieval times they thought the world was flat. No, they didn't, Dan. That's a myth.

Minor stuff, though. When it comes to fundamental science, the two main planks of the book are that ancient wisdom knew it all first and we're just re-discovering it, and that the 'new science of Noetics' will enable us to harness the powers of the mind. Oka-a-y.

The ancient mysteries bit is hammered on about for page after page, chapter after chapter. This is a classic example of the 'later books of J. K. Rowling effect' where a writer has got so powerful that the editor dare not suggest cuts. It really needs paring down. However, when you examine the reality of it, it's a load of coincidental tosh. You can see some of this in more serious books like The Dancing Wu Li Masters, which attempts to link modern physics and ancient Eastern philosophies. No Dan, it's not all in the ancient writings. There are just coincidental similarities that would be strange if they weren't there.

For instance, Yin and Yang is often considered to prefigure the bipolarity of nature - positive and negative in electricity, north and south poles in magnetism. But Yin and Yang is easily derived from obvious 2-way things (male and female, dark and light) and doesn't have to prefigure anything. Anyway, of course it 'prefigures' things that come in twos. But how about things in ones (gravity), in threes (quarks) or fours (fundamental forces of nature). Sorry, it's woffle - and the same applies to all these great mysteries. The ancients knew nothing about how the world worked. They produced woffly sayings which can be made to parallel pretty well anything given a bit of massaging.

As for Noetics - all his stated facts are wincingly unproven. I particularly liked his suggestion that thought has 'mass' and can influence matter, and (this is the important bit) the force increases exponentially with the number of people doing the thinking. So with even a tiny force, the crowds in St Peter's Square (for instance) should have no problem making the pope float over his balcony, say. Strange nothing like that has never happened. Suffice it to say that all the talk about this new science that is going to transform the world isn't registering on many scientific radars.

I'm not saying there is no point researching psi phenomena, by the way - I'm all in favour of the sort of thing PEAR used to do. But all that research has yet to come up with any usefully reproducable science. It is to physics what homeopathy is to real medicine.

In the end, then, The Lost Symbol was a bit of a disappointment. Although most of the science and technology was wrong, it was too woffly to have the sheer incompetent joy of earlier books. Never mind, though. I'm sure there'll be another one soon.
books science