Be your own laboratory 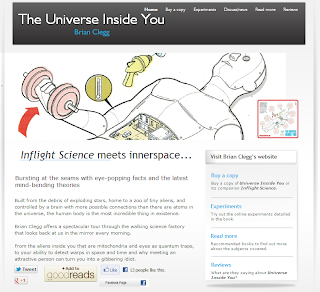 When I wrote The Universe Inside You I wanted to include a series of experiments to try out as I had done in Inflight Science. The difference was that many of these experiments were going to involve using your body as a lab, with quite a few using the brain.

It seemed the best thing to do would be to put together a website with those experiments that aren't so easy to do on the kitchen worktop, as opposed to (say) dropping antacid tablets in vinegar or extracting DNA (both in the book). And while I was at it, I could provide a more detailed 'further reading' section with links to other books, as a good few people had suggested that Inflight Science should have had suggestions for finding out more.

The outcome was www.universeinsideyou.com - I originally intended this purely as an adjunct to the book, but I've showed it to a sample of people who assure me it is quite interesting in its own right, so on their recommendation it's worth taking a look even if you don't have the book, whether you want to see someone walk on custard, experiment with optical and audio illusions, hear a piece of music that has travelled at four times the speed of sound, or interact with a piece of software that pretends to be a human being. Take a look!