In the storytelling centre 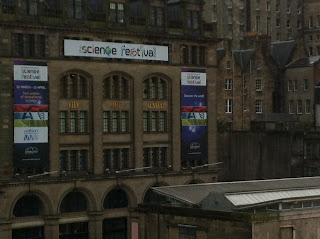 Yesterday morning I set off from Swindon station at silly-o-clock to head up to Edinburgh to take part in the excellent science festival. My venue was to be the splendidly named Scottish Storytelling Centre, and my topic Build Your Own Time Machine.

I'll admit it was a long journey, but one I would much rather do by train than any other way - I got loads of work done on the journey, and everything ran smoothly (we even arrived early), though I was a little confused by the new Kings Cross.

After a spot of recuperation at the splendid Hotel du Vin (accommodation provided by the festival) - even if I was slightly unnerved to be put up in a former asylum - I headed off for the venue.

I think it's fair to say it was a brilliant talk. That sounds even more big headed than you might expect from me, but what I mean is it was a capacity crowd, they were a wonderful audience and the Q&A at the end was one of the best I've ever had, with great questions, some decidedly insightful ones coming from children.

We finished off with a book signing, where there were more great questions, but just one sad problem. The bookshop had ordered the wrong book. It was one of mine, but not Build Your Own Time Machine. This was really depressing as I think I would have sold a good number. As it was, I had taken one copy of the book with me to wave around on stage and I had three people fighting over who got it.

I ought to stress this wasn't down to the event manager, who was charming and very helpful. But it was just so sad and I felt embarrassed and kept apologising to people.

Despite that, it certainly wouldn't put me off coming back to Edinburgh Science Festival - I had a great time, and I hope they invite me again.