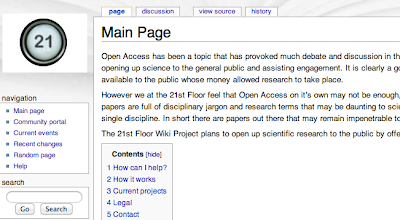 There is no doubt that the best detailed source of information on the real science that is being done is in the published papers that scientists are required to turn out to prove that they are still alive and working. But the problem for everyday human beings is

b) The are often almost unreadable unless you are already an expert in the field.

A new initiative called The 21st Floor Wiki Project aims to change that be asking scientists to contribute a page to a Wiki for each paper they publish that explains what the paper says to the general reader. It sounds a great idea, though I suspect many scientists couldn't be bothered to do it, and if they did do it would struggle to make it readable.

However, let's not damn it before it's tried. Here's more details from the handy press release. Why not take a look at the real thing? Though it is a bit devoid of content as yet. Fingers crossed...


Open Access has been a topic that has provoked much debate and discussion in the scientific community with many viewing it as a necessary step to opening up science to the general public and assisting engagement. It is clearly a good thing that research, at least that which is publicly funded, be available to the public whose money allowed research to take place.

However we at the 21st Floor feel that Open Access on it’s own may not be enough, science can be, at times, a complex an inaccessible thing. Research papers are full of disciplinary jargon and research terms that may be daunting to scientists from different disciplines or even from different fields within a single discipline. In short there are papers out there that may remain impenetrable to non-experts which is an issue that open access alone cannot fix.

If scientists or researchers have written or read anything that has been published in the scientific literature then we would like to invite them to create a page which summarises the work for a lay audience.

We would also like to invite scientists, researchers and science fans to summarise your research, or research you feel is important, in a way that can be easily understood by those outside your field.

We would hope that we could then develop these contributions into a resource that spans all disciplines and makes science more accessible and understandable to both non-scientists and scientists in other fields alike.

If anyone wishes to contribute the page should be named after the published title of the work and should ideally include the following sections (loosely following the structure of a standard research paper):
• A brief summary
• Why the work was done (what inspired the research? why did the authors want to ask these questions?)
• What was done
• What the results were
• What conclusions can be drawn from these results
• Implications of the research (what has been done with the work since publication? has it been reported in the popular press? have any scientific or public controversies arisen from the work?)

The service will always remain completely free of charge and advertising. Hopefully, with your help, we can turn this into a worthwhile resource for everyone who is interested in science and research for any reason.