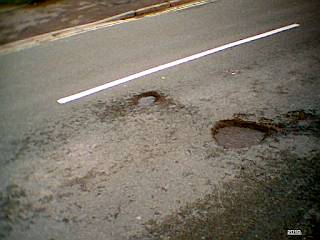 The use of statistics (and numbers in general) in news reporting is often a cause of concern. Sometimes, you really wonder if there is anyone with a brain involved in the process that goes from observing a piece of news, through writing the script to presenting it. This comes through particularly strongly when numbers that make the eyebrows raise are thrown about with no thought and no comment.

This morning, I heard on Newsbeat on BBC Radio 1 (don't ask) that it has been estimated that there are around 2 million potholes on Britain's roads, and that it will cost over 10 billion pounds to fix this. Story done - on to some bit of pop trivia.

But just a minute. Didn't anyone even think to do some basic sums here? If 2 million potholes cost £10 billion to fix, that's £5,000 a pothole. Now, okay, some will be expensive because of the difficulties closing lanes on a motorway or whatever. But the vast majority seem to involve half an hour with a couple of fat blokes and a barrel of tarmac. With optional addition of a road roller. In our previous house we had a space large enough to park around 10 cars surfaced with tarmac. This cost around £200 (not counting preparation, which wouldn't apply with the road). Most potholes are a fraction of a metre across. So let's say £50. Where does the other £4,950 go? Perhaps people should offer adopt a pothole. They sort it out and we pay them £2,000. Winners all round.

That's my top-of-the-head, ill-informed take on it. Anyone could do even better with a bit of research. But what irritates me is that the people on Newsbeat didn't exert a braincell to notice this price and to comment on it. It's not enough to parrot facts - you need to think about what they mean and give us a sensible commentary, particularly with the kind of audience that Newsbeat has. Come on news media. Get the thinking caps on.