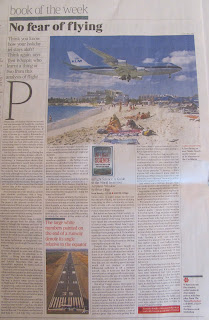 With 10 day to go to the publication date on my new book, Inflight Science, it has been a rather interesting weekend. It all kicked off with a very large review in Saturday's Times, naming it 'book of the week' (Times subscribers can read the review here.)

I've always had the opinion that reviews are great for making a book visible (and for providing nice quotes for subsequent editions), but don't necessarily get copies moving off the bookshelves. Out of curiousity I recently monitored the sales (well, the Amazon ranking) of Angela Saini's excellent Geek Nation. The reason I did this was because the book was getting a lot of media coverage - significantly more than a typical popular science book - and I was interested to see how this impacted on sales. Large (and very positive) articles in serious newspapers seemed to only make small blips in sales, where an appearance on Radio Four's Start the Week really pushed the book up the rankings to the upper echelons of sales.

When the Times review came out, Inflight Science was ranking something like 200,000th on Amazon.co.uk. This is the sort of position you might expect with a book that was yet to be published and wasn't a Harry Potter or equivalent. Based on past experience, I was expecting this to dip to maybe 100,000 or 50,000.

But over Saturday and Sunday, the ranking suddenly took off. At its peak, the book was ranked 32 - it was the 32nd best selling book on Amazon UK, making it #2 in the science section (pipped to the post by, you guessed it, Brian Cox). Not bad for a book you can't even buy yet.

The ranking is falling back a little now - only to be expected - and marketing people will tell you that you mustn't read too much into Amazon's rankings. But even so, it made for an exciting weekend!

If you would like to keep the ranking flying, please feel free to preorder a copy at Amazon
or if you're a Kindle person you can get it straight away! 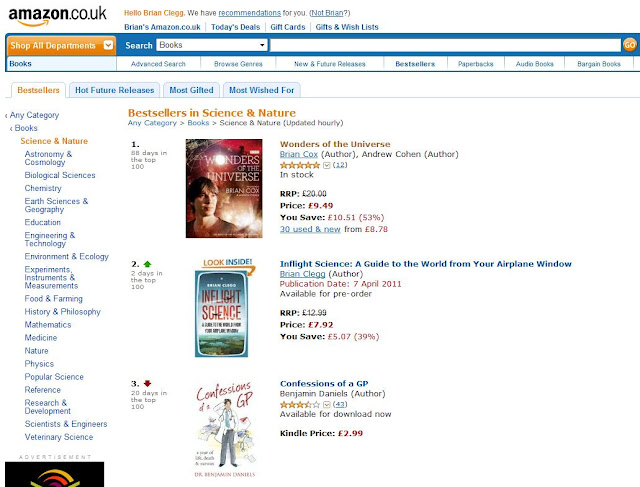