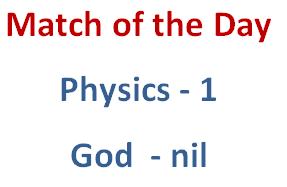 One of the best bits in the Hitchiker's Guide to the Galaxy is the moment when then starship Heart of Gold, powered by the infinite improbability guide, arrives at a planet. Because of the residual improbability, a sperm whale and a bowl of petunias are created hanging in space to plummet to the surface below. The sperm whale excitedly and optimistically names the phenomena it is experiencing until it goes splat. But the bowl of petunias simply thinks 'Oh no, not again.'

That is sheer genius, and a comfort when I think 'Oh no, not again,' as I did when I saw a headline from the online BBC News that read Physics threat to religion. Here we go a Dawkins-ing, I thought. But what a strange headline. Physics threat to religion. Is a fundamental force going to break religion apart? Is the sheer existence of quantum theory too mind boggling for God, who has given up and gone home?

When I read the article I was more than a bit disappointed. I was hoping for a good Dawkins-style bust-up with physicists going head to head with theologists. But no. It's a simple (and frankly rather simplistic when you consider the complex nature of the groupings involved) analysis of census data that shows that religious affiliation is in decline in several countries and then makes the probably unjustified leap to suggest that this will eventually result in a fall to zero.

It seems I wasn't the only one who thought that the original headline was misleading. It has now transmogrified into 'Extinction threat' to religion, which makes more sense. But why that original headline? Could it be that Dawkins apart, most of the science vs religion animosity is generated by the media? It just goes to show the power of the headline.