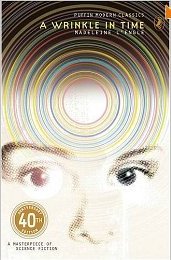 Funnily both my youthful introductions to tesseracts were from fiction. The first was in Madeleine L'Engle's wonderful children's classic (still very readable for adults) A Wrinkle in Time. I know some people don't like this book because it has an underlying religious message, but for me it is one of the best children's science fiction stories ever. In it, a tesseract is a gateway for interstellar travel.

But much more informative is Robert Heinlein's brilliant short story, And he Built a Crooked House, which appears in the collection The Unpleasant Profession of Jonathan Hoag. Dating back to 1941, this story tells of an architect who builds a tesseract house. Now, clearly you can't build a 4D structure, so what he built was an unfolded projection. We're all familiar with the way we can draw a cube on a 2D piece of paper. Similarly you can make a 3D projection model of a tesseract.

The best known version of this is a cube with another cube inside it. Each vertex of the inner cube is linked to the equivalent vertex of the outer cube. The eight cubic faces are the six shapes surrounding the inner cube, plus the outer cube and the inner cube. You might say 'That can't be right, those six surrounding shapes aren't cubes,' but remember this is just a projection. Look at how you draw a cube on paper. Most of the faces aren't squares in the projection.

You can also unfold a tesseract from four dimensions to three. If you make a 3D cube out of paper, you can open it up into a sort of cross shape and lay it flat as 2D. Similarly, you can open a hypercube out and 'lay it flat' in 3D producing a sort of cross shape of cubes. This is what the architect built in the story. But then, as a result of an earthquake, the house folds into a true hypercube. This means that various transitions from room to room are weird - and some of the windows look out on different universes.

We can't really make a hypercube, but here's the next best thing (thanks to Ramon Quintana for pointing this out). I don't know if it's correct, but it's certainly beautiful. Here is a 2D rendering of a 3D projection of a hypercube, being rotated on various axes: