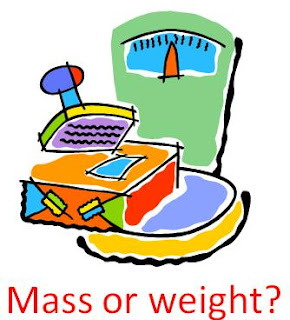 The book I was reading is too early in its production to talk about, but the thing it made me think about is how strange a thing weight is once you examine it.

Mass, as a concept, is pretty straight forward. It is how much stuff an object has in it. If you like to think in Einsteinian terms, it shows how much the object warps space and time. Easy enough. But weight is different. Mass is an inherent property of that object. Take it wherever you like and it won't change. But take an object to the Moon and its weight changes. That's because weight is a property both of the object and the gravitational field it lives in. Weight is the amount of force with which gravity pulls on an object, and so (and the reason why it is a useful measure) it is also the amount of force we need to exert to pick up that object against the pull of gravity.

The fact that we measure weight in kilograms rather than newtons reflects a parochial outlook. If the only acceleration due to gravity you ever experience is 9.81 metres per second per second, you can 'simplify' things by forgetting the acceleration and just using the mass as the weight - but it's an odd simplification when you think about it.

One last thought about weight. When I was at school we often used to discuss what would happen if you took a package to the Post Office filled with helium balloons. (Yes, this is the sort of discussion I had at school. And you're surprised I ended up writing about science?) With enough helium in a flimsy container, we reckoned that it should float, giving it a negative weight, and hence have a negative reading on the scales. Would the Post Office have to pay us to post it?

After all, you wouldn't say a brick has a negative weight just because it doesn't register on a scale when you hold it above the scale. It's just that you are applying an upward force that more than counters the weight. Similarly the buoyancy of the balloon (because it is lighter than the air it displaces) gives it upthrust, a second force acting in the opposite direction to gravity. No reduction in weight. I admit the Post Office doesn't have scales that produce a true weight. But in principle we got it wrong.