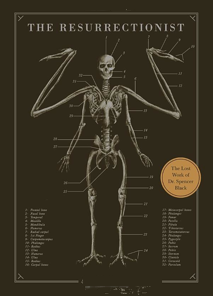 There was a time when any rich landowner worth his salt would build himself a folly, a bit of architectural madness designed to improve the view from his house or garden. Some of them are absolutely stunning - a fake castle built on the hills above or a bizarre three-sided tower looming at the edge of the grounds. The are all about appearance. They don't do anything apart from sit there and look wonderful. But this doesn't detract from their value.

I would say that a book I've been sent for review recently is the literary equivalent of one of those follies. It is magnificent, if practically hollow. The Resurrectionist is the first book by E. B. Hudspeth. It is a book of two parts. The first is the fictional biography of a late Victorian medical man, who starts as someone with a brilliant reputation as a surgeon helping to repair deformities. But over time he comes to believe that birth defects hark back to earlier forms of life now lost, forms that we retain in folk memories as mythical beasts like centaurs, harpies and satyrs. As this idea takes hold we see the surgeon, Spencer Black, descending to become a sideshow artist in a carnival, displaying first preserved freaks of nature (common enough in sideshows of the time), then creating his own fake corpses of hybrid creatures before finally plunging into the abyss of attempting to create these creatures alive. It is a dark and often unpleasant history.

The second part of the book consists of multiple anatomical drawings of these 'real' mythical beasts, with detailed skeletons, partially muscled cutaways and complete images of what they may have looked like when they roamed the Earth. I was a little disappointed there wasn't more narrative here. The problem, for instance, with flying horses and people is that they have far too much weight for the size of wing/musculature to ever lift - but there was no explanation of how this was got around.

However, there is no doubt that the drawings are beautifully done, with a totally straight face on the part of the author. It is truly a magnificent folly - but for me it doesn't quite work. The problem is that, unless you are into anatomy, once you've seen one detailed drawing of a skeleton, you've seen them all. So the second half of the book is worth little more than a quick flick through.

As for the first half, it is very neatly done with faked up posters and newspaper cuttings and sketches - but the problem here is that is almost too well done. What we have is a sober short biography of a Victorian character - but because this is how it is presented it has none of the dramatic drive of a good bizarre novel. I had to force myself not to skip some bits, because it was just a bit, well, worthy. Of course it isn't really - like the folly it is a cunning, intricate fake - but the trouble is it is a cunning intricate fake of something which is, despite the bizarre subject, rather dull.

Overall then, a brilliant idea, superbly executed, it just doesn't quite work as a piece of fiction for me, and I'm afraid the anatomical section, while briefly entertaining, did not hold my attention.

Find out more at Amazon.co.uk and Amazon.com.