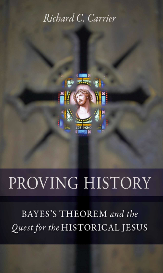 History is not unlike science, an observation made by Richard Carrier, the author of Proving History - and when you think about it, this idea makes a lot of sense. They both involve weighing up evidence, testing hypotheses and drawing up conclusions. In fact arguably cosmology is, in effect history rather than science, as it involves looking into the past and it is rarely possible to subject it to experiment or repeat it to see what happens.

That being the case, to do history properly, historians really ought to be using some of the tools available to scientists, but that they tend to ignore, in part because history has been around longer, but primarily, I suspect, because most historians have neither the training nor the inclination to dip their toes into mathematics. But the message of Proving History, written by a historian, is 'Come on in, guys, the water is lovely!' Carrier doesn't mention it, but there is a precedent here. Until recently biologists were basically natural historians. They merely observed and classified - they were doing Rutherford's 'stamp collecting' - they too avoided mathematics with fear and loathing. Now, though, some branches of biology make heavy use of maths, and have been transformed as a result. Biologists have learned to love numbers and a new breed of historians (it's probably too late for the old brigade) can and must too.

The tools Richard Carrier employs are logic and Bayes' Theorem. The logic is simple enough (though it is surprising how many examples Carrier gives where historians have drawn illogical conclusions). Bayes' Theorem is a little harder to get your head around. This statistical method is something I cover at some length in Dice World, because it is arguably one of the most powerful tools we have for predicting the future. What I didn't really full absorb is that it is also a great way of weighing up historical evidence and hypotheses. (It's odd, now I think of it, that I didn't do this, as the main example I give to demonstrate Bayes is deducing whether or not my dog is a golden retriever, which is, in effect, history, rather than future gazing.)

What Bayes' Theorem does is allow you to work out the probability of something being true with limited information, and modified by secondary evidence. As mathematics goes, it is actually very simple - a doddle compared with calculus, for instance - but for some reason, the way it is traditionally described makes it really hard to grasp, so one essential in selling the value of Bayes to historians is making your description simple. Unfortunately this is where Carrier falls down. If anything he makes Bayes' theorem sound more complicated than it is.

There are a couple of other problems with the book. I'm not quite sure what the target audience is, but the book is far to dry and dull to be anything but an academic text. This is a real shame, as the message is one that everyone should be interested in - here is a tool that could transform the way we assess our historical data, that could transform history. He perhaps should have had a co-author to make the text more approachable. It's not that the content is too complex, just that the way it is put across is often difficult to absorb.

The other problem is that Carrier is setting up this method primarily to be ready for his second book, in which he will dispute the historical reality of Jesus. This being the case, most of the examples in the book are from the Bible. I think this is a mistake, because this approach is so powerful it ought to have been set out in general historical terms in book 1 before he got onto his 'historicity of Jesus' theme in book 2. I think the subject matter will put some people off, who would otherwise benefit greatly from the underlying theme.

So if you are interested in the nature of history and how it can be improved, it is worth wading through the rhetoric to get to the juicy bits. It's a shame there aren't more examples, as the writing comes to life when dealing with specifics - it is only when it is being generic, which is much of the book, that it is hard going. If you are interested in Christian history, well and good - but if you aren't, again I would urge you not to be put off because the underlying approach applies to all of history and is far too good to waste. You can see the book at Amazon.com and Amazon.co.uk.