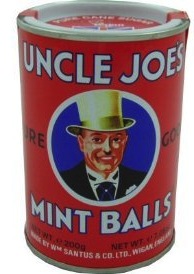 Like most people from the North West of England, I might grumble about the people of the North East, especially those from Yorkshire, but also have a grudging respect for them. However there is one subject that totally divides North East from North West. And that is mints.

Each of these great regions has a mint product they are deeply proud of. For us in the North West it is Uncle Joe's Mintballs. For the North East it is Black Bullets. Each comes proudly in a tin. Each is really rather a similar product (though slightly strangely, Black Bullets are more, erm, ball-shaped than Mintballs). They are brown, hard sweets with a strong mint flavour. I've never done a comparative taste test, but my suspicion is that they are very similar. Of course, Uncle Joe's are more sophisticated - they come in wrappers, where the Geordie equivalent is naked - but to be honest the sweet itself is much the same.

I have to grudgingly admit that having discovered they can be bought from Amazon we now tend to have the dreaded Black Bullets in the house, though while researching this piece I discover they also sell Mintballs, so we may see a change. After all, I'd rather they were Uncle Joe's, just on principle.

It's a bit like supporting the UK at the Eurovision Song Contest. It might just be a mint. It might not even be the best mint in the world. But it's our mint.