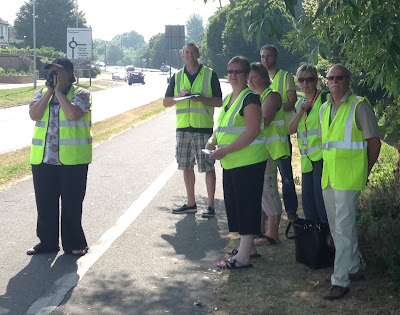 The other day I passed a speed trap clearly operated by amateurs rather than the police, so I stopped and went back to take a look at what they were up to.

There seemed rather a lot of them to operate a speed camera - I don't know if it was for self-defence in case they were attacked by irritated motorists, though I suspect it's more likely they were the kind of people who enjoy wearing day-glo vests and appearing official. I rather expected they would object when I took their picture, but they were quite happy about it.

Now I've lived in a village where people drove through too fast, and I would mouth rude things at them as they did so - but I am really not ecstatic about this kind of action. I don't think amateurs should be handling complex equipment, especially if they are going to do anything more than take a survey.

There were several things that worried me about the way they were operating. I clearly have no idea if the speed camera was well calibrated - but would they either? More to the point, the operator in the left of the photo was shouting out speeds. So she was going '32, 35, 31, 35, 36' while the guy at least three metres behind her was noting these down. Two things worried me here. I don't know enough about radar guns to know their recovery time/how long they need to monitor a car before they have an accurate speed reading, but she was reeling off these numbers at faster than one a second. That sounded too frequent.

If they were just doing a survey, my second issue isn't important - but if they were also noting car registrations, there is a big issue with the way these were being recorded, as the guy with the clipboard was well separated from the speed gun, and was having to guess which cars the operator was shouting speeds for. She gave no other information, so there was no clear link between speed and car. It would have been very easy to get out of synch.

As I mentioned, I do think we need to keep speeds at safe levels - but I'm really not sure that speed trap vigilantes are the answer.