Why I hate company suggestion schemes 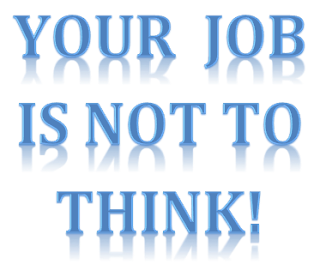 When I'm helping companies be more creative, one of the first things I recommend is that they get rid of any suggestion scheme. These are usually in the form of  a prize competition. You send in your ideas and if they company likes them and implements them you get a reward. It might seem these are a good idea - but they are poison. Here's my analysis from my book Creativity and Innovation for Managers:


There was a time when the staff suggestion scheme was the beginning and the end of an innovation agenda in most companies. The theory seemed good. Anyone in the company could contribute a suggestion. When they had a bright idea (or brainwave, or whatever glossy term was chosen for the scheme), they filled in a form, popped it in the post and before long the best ideas would be implemented, with the idea merchant awarded a nice, fat cash bonus.

It has been recognised for a long time that suggestion schemes aren't very effective, given the resource available and the meagre results they generally produce. What is now being suspected is that suggestion schemes in their traditional format are actually disadvantageous. It's not just that they are harmless but useful, they can be destructive.

The suggestion scheme problem has many causes. The administration of such schemes is a thankless task. Generally it is given a low administrative priority. So it can take a long time for an idea to be processed - sometimes so long that the idea is no longer current. When the idea comes to be assessed, there is often a natural reluctance from the assessor to accept it. A classic reaction is 'we've tried it/thought of it before and it didn't/won't work'. The trouble is, this kind of assessment totally overlooks the point that most new ideas are easy to shoot down. They need to be nurtured, not assessed into an early grave.

The negatives don't end there. Many schemes set the level of award on a proportion of the cost saving the idea generates. At a stroke this disenfranchises any ideas that involve revenue enhancement rather than cost cutting. In fact, it generates a mindset that cost cutting is more important than revenue generation - a fatal position if a company is to survive and grow. To add insult to injury, many schemes distinguish between manager and worker, or between areas of the company. Managers aren't allowed to take part because 'it's their job to have ideas'. Yet an engineer who thinks of a way of reusing a flange sprocket instead of buying a new one (surely his job too) gets a fat cheque.

The outcome is a system that is divisive, generates negative feeling and stresses costs over revenue. This does not mean that is impossible to get creative input from the entire company. Quite the reverse. Just that the suggestion scheme is not an appropriate vehicle. This chapter looks at a number of ways of making innovation a part of the company culture. To support that, ideas from the staff need to be encouraged. But they should be able to work outside of a formal scheme, sending them directly to those who can make it happen, or to their manager if they don't know who to send it to. Effective use of e-mail within the company is probably the strongest vehicle for making this happen. If there is a culture that it is okay to send an e-mail to anyone - the chief executive included - with an idea or suggestion, ideas will flow from the most unexpected sources.

There then follows the usual painful process of suggestion scheme mechanics. It is interesting that there is a creativity technique called 'Reversal' where, in order to solve a problem, you first try hard to make the opposite happen. For example, when trying to improve communications in a company, you first say what would positively discourage communications, then turn round the ideas that arise to stimulate positive communication. This scheme shows every sign of reversal being used without ever turning things back round. For example, could you think of a better way to make sure that contractors and other non-permanent staff did not think of themselves as part of the company, and did not have buy-in to what the company was trying to do?

Reward should not be through a separate scheme, implying that creativity is something special you do once in a lifetime, but through the regular company reward scheme. It shouldn't be a case of 'we can give you a cash bonus because having this idea isn't your job'. Instead, having an idea has to be everyone's job, and those who do it well need to be rewarded appropriately, just as they are rewarded for other aspects of their job.

If you want to see how really not to do it, here is a real example I found:


While researching this book, I contacted a number of large companies, asking what they did to further creativity and innovation in the company. One multinational gave a good example of why suggestion schemes don't work. To avoid embarrassment, the company is referred to below as X.

The company's PR department, on a second contact said 'I found this on the intranet - I didn't even know we had anything like this.' What she referred to was a document explaining the suggestion scheme. Now the document had all the right buzzwords, but it managed to make innovation about as exciting as filling in an expenses form. For example: "To gain and sustain competitive advantage, X must stay ahead of the field in innovation as well as cost reduction and efficiency. All employees have a part to play in identifying new practices etc. to enhance revenue generation, improve the way the company operates and maximise continuous improvement.' Just in case the wrong people got hold of the document: 'The arrangements explained in this document are for all employees of X plc. Non-X people may offer suggestions: they will not receive awards if their suggestions are used, but their contribution will be recognised.'