Whatever happened to Hi-Fi? 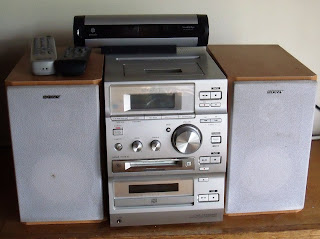 I accused my agent of being a hi-fi geek the other day, because his sound recording equipment has a valve in its amplifier. He made the observation that no one bothers about hi-fi anymore, and it got me thinking - as is all too often true, he's right.

When I was at university I had individual component hi-fi. I had big, chunky speakers, which I carefully positioned so that I got a good stereo field when sitting in the right place. My first decent speakers were heavy. I know this because I lugged those Monitor Audio beauties all the way from the specialist shop near the railway station to my college - and anyone who knows Cambridge knows that this is a serious walk to be carrying speakers with the approximate weight of a large dog.

Now, what you see is what I've got. A titchy Sony mini system, which I've not even bothered to separate the speakers on. And half the time the input is coming from that little box on top, which feeds MP3s or WMAs from my PC via the wireless network - so degraded quality sound too. If I'm not listening to that it's direct from the PC, with its silly little speakers, or on iPod earbuds.

Some will blame the iPod for this. It's certainly true of the next generation - my daughters happily listen to music on an iPod or phone's speakers, which is just too tinny for me. But that's not why I abandoned the chunky stereo. The fact is, I don't sit down and listen to music any more. I have it on in the background sometimes, but it's very rare that I dedicate time to purely listening to an album. I just can't be bothered.

Somewhere along the line there has been a psychological shift - and I don't think it's just in me (and my agent). Music has become so ubiquitous, and there's so much choice available at the click of a mouse, that it doesn't seem worth giving full attention to anything less than a full scale, live gig. I don't know whether this is a good thing or a bad thing. I can feel a touch of nostalgia for the old days... but I have a sneaking suspicion that I prefer things the way they are now.