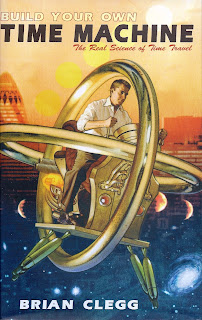 Since writing How to Build a Time Machine/Build Your Own Time Machine, time travel has been a particular interest for me, so I was delighted to be offered a chance to have a preview of the new movie Looper a few weeks ago. (No spoilers in the first part of this piece.)

The premise is an interesting one. In the future, criminals send people they want to get rid of back in time around 30 years. There a hired killer shoots them as they arrive. But part of the contract is knowing that eventually the person who gets sent back with you. At that point the killer gets enough money to retire on and has 30 years left. But, of course, things get complicated when our hero, Joe, faces the future version of himself. (I'm not sure how he knows it's him as there is no resemblance, but hey.)

I'll give you some general feelings here, safe, if you are going to see the movie, and then some detailed comments after the spoiler break. It's being promoted as this decade's Matrix. I think that's wrong - for me that accolade could only be applied to Inception. But I know why they've said it. Looper is good at combining exciting action with bits where you have to think a bit. And segments of it are downright clever. I think they could have made more of the possibilities for Inception like multi-layered action, but is still works well and I would highly recommend it if you like science fiction action movies with a little more thought that a typical Arnie movie. Certainly streets ahead of the recent remake of Total Recall.

The spoilers come after this trailer:

There are some lovely ideas in this movie. I like the concept of the killer finishing his contract by killing himself. There was some real poignancy in Bruce Willis losing his memories of his wife as young Joe's future changes as a result of old Joe's presence in the past. And the time travel comes close to making logical scientific sense. There's one big science fact error - it is loudly announced that time travel hasn't been invented, but it will be. The implication is people are travelling back to a point before time travel has been invented, which isn't possible. But I like to think this is the director/writer Rian Johnson setting us up for a Looper 2 where it turns out that time travel really had been invented earlier.

One weird thing was the telekinesis aspect. It has nothing to do with the rest of the plot - I just can't see the point of it. Should have been binned unless it too is primarily for future movies.

I had more trouble with a couple of basic logic issues. The whole point of the looper system is that it's not safe to kill people in the future as you will definitely get caught, so they send people back thirty years to kill them there. But we see them kill Bruce Willis's wife quite casually in the future. Why doesn't this present the same problem? If they can get away with this, they can find an easier way to get away with other killings than sending people into the past.

Small physical quibble. The blunderbuss used to kill the victims would not send the bodies flying back. Simple Newtonian physics, guys. I know a lot of movies get this wrong, but it's poor science.

The other big logic problem is over the use of resets. Fairly early on, young Joe is killed. Then the action just restarts a little earlier. The (sensible) implication is that if he was dead his future self couldn't come back, so the chain of events would never have started. That's fine, though it is presented in a rather confusing way. But the denouement involves young Joe killing himself to stop old Joe from killing others people. Why didn't this also cause a reset? It's inconsistent.

One lovely idea I've never seen before was that the young versions of loopers could communicate with the old version by carving a message on their arms to leave a scar. This is brilliant - the only slight problem with the execution is that the old loopers suddenly realize the message is there, where actually they would have known about it for 30 years.

I'm nitpicking here, but detail can make a lot of difference to a science-driven movie like this. I know it is fiction, and I'm quite happy for science to be distorted to fit the storyline - but it doesn't do any harm to point out where it went wrong. Overall, though, I really enjoyed the movie and it even occasionally made me think, which can't be bad.