Isaac Asimov was a great science fiction writer, but even the best has his off days, and Asimov’s low point was probably his involvement with the dire science fiction movie Fantastic Voyage. Asimov wasn’t responsible for the story, but provided the novelization – and he probably regretted it. The premise of the film was that miniaturization technology has made it possible shrink a submarine and its crew down to around 1,000 nanometres, sending it into a man’s bloodstream to find and destroy a blood clot on his brain.

Along the way the crew have various silly encounters with the body’s systems – but strip away the Hollywood shlock and underneath is an idea that has been developed in a lot more detail by IT pioneer and life extension enthusiast Ray Kurzweil. Based on the idea of miniature robotic devices – nanobots – Kurzweil believes that in the future we will not have a single manned Proteus submarine as featured in Fantastic Voyage in our bloodstreams but rather a whole host of nanobots that will undertake medical functions and keep humans of the future alive indefinitely.

As we have seen in The Importance of Being Wet, the chances are that any such devices would not be a simple miniaturization of existing mechanical robots with their flat metal surfaces and gears, but rather would be based on the wet technology of the natural nanoscale world. 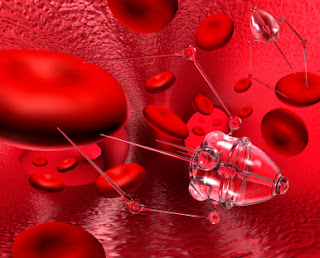 Among the possibilities Kurzweil suggests are on the cards are self-propelling robotic replacements for blood cells (this eliminates the importance of the heart as a pump, and hence the risk of heart disease), built in monitors for any sign of the body drifting away from ideal operation, nanobots that can deliver drugs to control cancer or remove cancer cells, and even miniature robots that make direct repairs to genes.

Kurzweil also expects we might separate the pleasure of eating from getting the nutrients we need, leaving the latter to nanobots in the bloodstream that release the essentials when we need them, while other nano devices remove toxins from the blood and destroy unwanted food without it ever influencing our metabolism. You could pig out on anything you wanted, all day and every day, and never suffer the consequences. (Given Kurzweil is notorious for living on an unpleasant diet to attempt to extend his life until nanotechnology is available, perhaps this is wishful thinking.)

If we are to develop this kind of nanotechnology, there are two aspects of nature that we will need to use as guides. One is to listen to the bees. Bearing in mind just how small a medical nanobot would have to be, even with the best developments in electronics the chances are it would have to be relatively unintelligent – yet it would need to achieve quite complex tasks. Bees are an excellent natural model for a way to achieve this.

A colony of bees achieves remarkable things in the construction and maintenance of its hive – yet taken as individuals, bees have very little capacity for mental activity. The realization that transformed our understanding of bees is that they form a super-organism. In effect, a whole colony is a single organism, not a collection of individual bees. A bee is more like a cell in a typical animal than it is a whole creature. By having appropriate mechanisms for communicating between the component parts – in the case of bees, using everything from chemical scent markers to waggle dances – relatively incapable individuals can come together to make a greater whole.

It would be sensible to expect something similar from medical nanobots at work in a human body. Individually they could not be intelligent enough to carry out their functions properly – but collectively, if they can interact to form a super-organism, they could operate autonomously without an external control mechanism continuously providing them with orders.

A second model for these miniature medics is a piece of natural nanotechnology that we usually regard as a bad guy – the virus. Viruses are very small – typically between 20 and 400 nanometres in size – and they lack many of the essential components of a living entity. However they are able to reproduce and thrive by using a remarkably clever cheat. Lacking the physical space to carry all the components of a living cell, they take over an existing cell in their host and subvert its mechanism to do their reproduction for them. 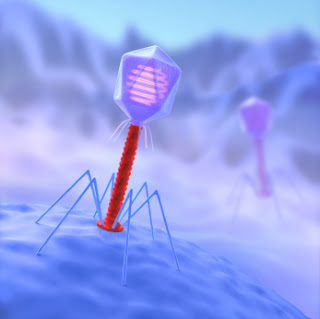 The particular class of virus that may be particularly useful as a model for medical nanobots is the phage. These are amongst the weirdest looking natural structure – some have an uncanny resemblance of the Apollo Lunar module: they actually look as if they are the sort of nanotechnology we might construct.

The word ‘phage’ is short for bacteriophage – ‘bacteria eater’. These are viruses than instead of preying on human cells – or those of any other large scale animals – attack and destroy bacteria. Because there are so many bacteria out there (even the human body has ten times more bacteria than human cells on board), their predators are also immensely populous and diverse. Phages may not be common fare on David Attenborough’s nature programmes, but they play a major role in the overall biological life of the Earth.

Because phages attack bacteria, they can be beneficial to human life. Throughout human existence we have been plagued with bacterial infections. (Literally – bacteria, for example, cause bubonic plague.) It is only relatively recently that antibiotics have provided us with a miracle cure for bacterial attacks – but that miracle is weakening. Bacteria breed and evolve quickly. There are strains of bacteria that can resist most of the existing antibiotics. But phages have the potential to attack bacteria resistant to all antibiotics. For a long time phage therapy was restricted to the former Soviet Union, but interest is spreading in making use of phages in medical procedures.

The biggest problem with phages is getting them to the right place. But medical nanobots based on a phage’s ability to attack or modify particular cells, combined with a super-organism’s ability to act in a collective manner would have huge potential. Modified viruses are already used to insert genetic payloads into cells – but the nanotechnology of the future, inspired by the phage and the bee, could see something much closer to Kurzweil’s vision.

Moving away from the medical, and from individual nanoscale elements, in the next installment of Nature’s Nanotech we will see how natural nanotechnology plays a role in silk and how fibres based on a nanotechnology structure could make rockets obsolete for putting satellites into space.