Prometheus versus Cabin in the Woods

October 15, 2012
Over the weekend we had a bit of an iTunes smackdown, watching Ridley Scott's prequel to Alien, Prometheus and the Joss Whedon produced Cabin the Woods. I can't say either was brilliant, but I definitely preferred the lower budget number. 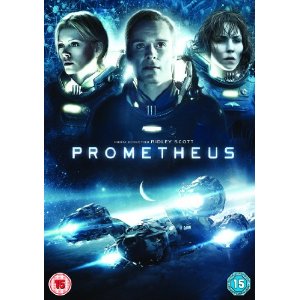 First, Prometheus. You have to say there was great CGI - very realistic looking. Inevitably there were movie references - I couldn't help sniggering when a ship's computer with a voice like HAL addressed someone called David. That couldn't be a coincidence, even though there were no pod bay doors mentioned. And there is no doubt that Ridley Scott has a good line in creating tension. Of course if you've seen Alien (I did first time round in the cinema) once the protagonists got in the room with lots of egg-like cylinders you couldn't help feel a little nervous for them. But even though Alien was little more than hide and seek in space, it was very good, tense hide and seek in space, where I struggled more to get engaged in Prometheus.

There was very little plot structure, the aliens were tediously consistent in being homicidal monsters and I really didn't care for many of the characters. Whenever Hollywood does someone really old by piling on the rubber it looks so fake that you wonder why they can get monsters right but not this - the really old man, who was an important part of what plot there was, was truly bad. (On the plus side, Charlize Theron was stunning, if something of a cipher.)

I'm afraid I couldn't help but laugh aloud at one point, when two of the protoganists were trying to run away from a huge space ship that was falling on them... by running along the length of the ship rather than going sideways and covering a fraction of the distance to safety. It was pure Road Runner. And the baby Alien at the end looked far too much like a child dressed like Alien for Halloween. All in all it made me appreciate how brilliant Blade Runner still is. But at least Prometheus was better than the remake of Total Recall. 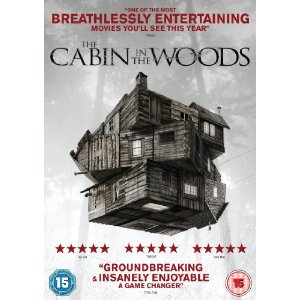 So we come to Cabin in the Woods. This was a relatively low budget movie that for some reason was shelved for several years before it came out. Despite getting very mixed reviews, I had to love it to some degree as I'm a huge Joss Whedon fan. Buffy, Angel, Firefly and Dollhouse all score high amongst my favourite TV. And Whedon didn't do badly with the Avengers Assemble movie, though I think his ability to combine drama, fantasy horror/science fiction and big dollops of humour works best on TV because there's more time for things to develop. He also has more chance to produce his trademark reversal of expectation in TV - but having said that, this was something this film certainly packed in. Whedon wasn't the director, but he was writer and producer, and it shows.

Whedon fans will be delighted that three of his rep company are present in the cast, though mostly underused, apart from the nerdy self-deceiving scientist from Dollhouse, who is excellent as a stoned fool who turns out to be a key character against all expectation. It might be portrayed as a traditional teen horror slasher, but the first scenes with a kind of industrial control room, manipulating what's going on in the teens' horror story make it clear that it's something different and won't play as expected. (One of the best bits was the phone conversation with the evil harbinger at the gas station near the cabin, who really gets peeved when he finds the control room has him on speakerphone to laugh at his portentous remarks.)

In the end, I don't think it quite works. The overall concept is brilliant if bonkers, and some parts of it work well, but the ending clearly was a 'we can't think want to do next' bit of writing. Having said that, a major theme in Buffy et al is how you might have to sacrifice your friends and everything to save the world. The ending inverts this traditional Whedon mainstay by putting friendship ahead of saving the world.

I can't stand gore/slasher movies like Texas Chainsaw Massacre or Saw, so when it turned out that some of the baddies would be zombies with TCM tendencies I was not thrilled - but actually even though there are times when a scene is absolutely swilling with human blood, you don't see too much detail, which makes it more acceptable for me. For all its problems, there was much more originality and inventiveness in Cabin in the Woods than there was in Prometheus and I have to say it made for much the more enjoyable evening of the two.

Both are now available on DVD/Blu-ray.