Voting for police commissioners is idiotic 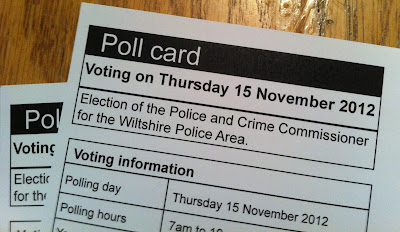 Like me, if you live in the UK and you are on the electoral register, you will probably have had one of these through the letterbox: an invitation to go and vote for your friendly local police commissioner. (Sorry, I just can't say that without thinking of Batman and Commissioner Gordon.)

I think this is probably the most stupid thing the present government has done: electing someone to the job of police commissioner. I mean, think about it. Imagine you ran a big business and you are recruiting someone to an important position. What would you say to the HR person who came along and said 'I have a bright idea! Instead of the usual recruitment process, we'll ask each candidate to produce a glossy brochure about themselves (though you won't see all of them), and you will then give the job to the person whose brochure you like best! {Bright HR person smile}' If that happened you would be advertising for two jobs: the original one and a new HR person.

So how would I appoint a police commissioner? I would use the existing jury service system to call together an electoral jury for the police area. That jury would do exactly what an appointment board would do for a real job. Read an application form, see the results of psychometric and problem solving testing (yes, our would-be commissioners would have to undergo testing, shock, horror) and interview each candidate before deciding on the best person for the job.

Which approach do you think would get the best candidate?

Come to think of it, what about MPs? I don't propose removing the franchise to elect MPs, that's too important for democracy. But at the moment we know very little about our MPs before we vote for them. So I would have several electoral juries assessing each candidate and the results of those assessments would be put online (including videos of the interviews) for everyone to see. You could look at each would-be-MP's psychometric and problem solving test results, read their application forms, watch their interviews.

Why several juries? Because I think would-be-MPs ought to be tested on a number of areas, so I would have juries with a range of specialities. These might be:


The 'local issues' jury would be for any voter from the electoral district, but we could give weighting to people with expertise in science etc. for the specialist area juries. Each jury would recommend a person for the job, information that would also be available to voters along with the test results, videos etc.