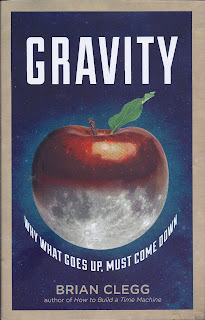 I am delighted to announce that my latest book, Gravity is now available in the UK as well as the US. My first encounter with it was a bit of a shock, when I turned up at my talk in Lichfield last Sunday and there it was for sale - but I now have my own copies, so it seem real.

There was one other surprise, though. I was expecting a white cover featuring Harold Lloyd hanging off a huge clock face, clearly being seriously influenced by gravity and fitting the new tag line dreamed up by UK publisher Duckworth 'What goes up, must come down.' At the time of writing, the Harold Lloyd cover is still on Amazon. But instead we have the cover shown here - about as different as you can get.

I rather like the new cover. It has gravitas, which is rather appropriate. The earlier cover suffered, perhaps, from too much levity. (Gravity and levity were in ancient Greek times simple opposing tendencies. Heavy objects had an urge, a desire even, to head towards the centre of the universe, i.e. the Earth. This urge was gravity. Light objects had an urge to move away from the centre of the universe - levity.) It's rather handsome too with that subtle blend of the apple and the Moon having nice Newtonian connotations.

But a little part of me misses Harold Lloyd...