The Rise and Rise of Linked-in 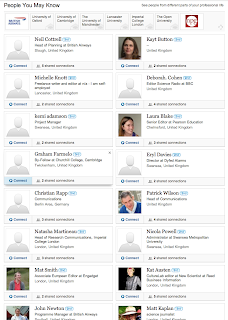 I was a member of Linked-in, sometimes described as Facebook for business, before I'd even heard the term social networking, but for years did nothing with it. In fact, if someone asked me to be added as a contact, I used to reply 'Yes, but I rarely use it.' Now something has changed.

I have started taking Linked-In seriously. What tipped me over the edge was an email conversation with a publicist at a publisher. I had asked said publicist if she knew what had happened to an editor at a magazine I had written for in the past, as the email address was bouncing. Oh, yes, said the publicist, according to Linked-in she (the editor) has moved to work here (a different company). And within seconds I was back in contact with said editor.

The light bulb went on. I finally saw the point.

So since then I have been working on expanding my Linked-in connections and making myself more visible in the environment. It genuinely is a valuable tool for keeping in touch on the business side - much more reliably so than Facebook or Twitter. I won't drop either of those as they have a different, if overlapping, world of people - but I am now treating Linked-in with respect.

If I pull it up now I have in front of me the Head of Planning at British Airways, freelance writers, editor of Science Radio at the BBC, a Fellow of Churchill College, Cambridge, an administrator at Swansea Met University, a New Scientist editor, the Chief Executive at World Book Night, the Web Development Manager for Tesco... it is truly awesome.

Are you on Linked-in yet?