Bring back my bookshop to me, to me 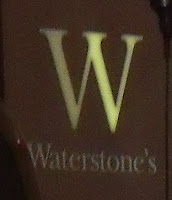 In the UK there is only one significant chain bookseller left - Waterstones. They aren't perfect by any means - but they're a lot better than nothing. Yet nothing is what a fair number of towns look likely to be left with soon.

I gather the HMV chain, which owns music/video store HMV and Waterstones has had a bad quarter. They still made a profit, but profits were down on the previous year. Because of this, they have decided to close 60 shops - 40 of them HMV and 20 Waterstones. But here's the thing. It is the HMV part of the chain that has done really badly - Waterstones isn't the problem, yet 20 bookstores are to go.

I don't know if this on top of, or as a well as a separate announcement I saw that Waterstones in Maidenhead and in Slough are to close. This seems like someone with a grudge - these are adjacent towns, leaving a big hole in West Berkshire's book buying capability (I know there's Windsor still, but even so...)

Lovers of independent bookshops might be rubbing their hands with glee, seeing the demise of the chain as a good thing, but I really not sure. I am very fond of good indies (though I do know a couple of rubbish ones), but there should be room for both - like it or not, somewhere like Waterstones (and the sadly demised Borders) are better at pulling in the borderline book buyer than the slightly clubbish, in-crowd feel of an independent. Now the large group of occasional buyers will be left with W. H. Smiths and supermarkets. I'd also say in Waterstones' favour that, as an author, I've had really good experiences with both the Waterstones at the Science Museum and in Swindon.

This is very sad news for the towns involved (I don't know which yet), and I wish HMV would reconsider. We need our Waterstones.