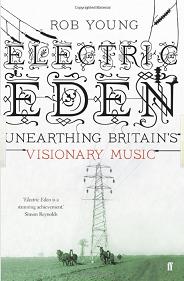 Inspired by my post on the book The Rest is Noise, my niece kindly bought me a copy of Electric Eden by Rob Young for Christmas, which I have just finished (something of a mammoth feat, as the book is over 600 pages long before you hit the notes.

It's sort of on the 20th century British folk music revival and the development of folk rock, though it goes beyond this in many ways. This isn't a musical form that I've had a lot to do with, and it was really interesting to find out more about it.

There were three aspects that really stood out for me. One was the early 20th century stuff, where the likes of Vaughan Williams and Holst were rediscovering folk music live from old country performers and bringing it into serious music. Then there was the group, the Strawbs. I knew the name, but I didn't know either that they did a form of electric folk or that, bizarrely, their keyboard player was briefly that wonder of the synthesiser, and now grumpy old man, Rick Wakeman. (I just love his schlocky Journey the Centre of the Earth). I really must buy a Strawbs album. (In fact since writing those words, I have been over to Amazon and ordered a couple.) Then there was Pentangle, the only folk/rock group whose output is reflected on my shelves.

For the rest, I must admit, I tended to know the names (Fairport Convention, for instance) or their one or two pop hits (Steeleye Span), but nothing much of their output or lives. One absolutely fascinating factoid comes through. When someone heckled Dylan as a traitor for using an electric guitar, he was being accused of being a traitor to a 'tradition' that had only been around for a couple of decades. The guitar didn't feature in folk music until after the Second World War, so that whole acoustic guitar sound is actually a modern construct.

What I found a little frustrating is that several performers I do like - Al Stewart particularly, and one period of Jethro Tull, for instance - are on the edge of folk crossover, and get passing mentions, but there is no detail about them at all, which was very frustrating. I also found that some of the book was pretentious and unfocussed - I can't see the point, for instance, of an opening chapter wholly dedicated to an obscure folk singer called Vashti Bunyan, who seems to have sold about 500 copies of two albums and spent years wandering around in a gypsy caravan, unless it was supposed to be a metaphor for folk music's commercial ambivalence, or something.

Despite occasional frustrations, though, this was a fascinating read about a strangely unworldly twig of the tree that is the music business and well worth investigating. See at Amazon.co.uk - See at Amazon.com