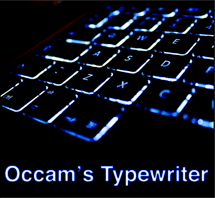 I've given it a little while to settle in, but I want to take the opportunity to welcome a new science blogging environment, Occam's Typwriter* onto the scene.

I first started blogging through a science blogging environment, Nature Network. This had pros and cons. On the plus side, I met and become friends with several other excellent blogpersons, some of whom I have since met for real. And the association with the journal Nature gave the environment considerable gravitas. But there were negatives too. Nature management were quite fussy about exactly what you put on your blog, and the blogging environment was from the stone age. Relatively recently they upgraded to a new version (the fabled MT4) which certainly added some features, but makes the whole thing so byzantine as to be practically unusable.

I had already pretty much left by this point, but MT4 and some mismanagement seems to have been the final straw for a number of Nature Network regulars, who set up their own new home Occam's Typwriter on the much more amenable Wordpress environment. I won't list them all, but a couple of examples of the eminently followable inhabitants of this space are Henry Gee (who has migrated his Blogger musings there) and Stephen Curry.

Two questions remain. Why set up a 'science blogging environment' at all, and why am I not on it?

The point behind it, I think, is that the environment makes it easier for a group to pull together. Membership gives a feeling of corporate unity, rather than lone struggle (and most scientists are used to working in teams). It also makes for an easy way of finding other blogs to read. I follow individual Occam's Typewriter blogs via Google Reader rather than going to the environment itself, but for new readers it's a good way to expand your experience of science bloggers. I wouldn't know these nice people if it weren't for Nature Network providing that stepping stone.

The simple answer to why I'm not on it is that I wasn't asked. I was always a little skew on NN, in that I'm a science writer where most of the others were scientists, which may have been why they didn't think to ask. (It wasn't just because I had already left NN, as Henry Gee had left also.) When I pointed out that I was a little miffed that they hadn't asked me, I was told I could do some guest blogs and then the community would then decide whether or not they wanted me. I have to say, I found this rather offensive, though I'm sure no offence was intended. As it happens, though, I had already decided that I didn't want to join as I'm quite happy with this blog and didn't want the upheaval caused by moving.

So if you are interested in reading a wider range of science blogs, I can do no better than recommend that you pop over and take a look at Occam's Typewriter.

* For all pedants, yes, they didn't have typewriters in William of Ockham's day, and 'Ockham' is the more accepted form of the name, rather than Occam these days. But hey, it's just a name. They could have called it Orchestral Manoeuvres in the Dark.