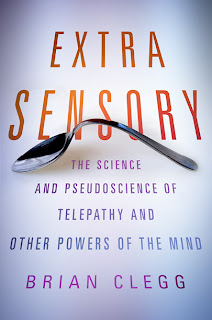 In the first chapter of my recent book Extra Sensory I wrote this:

Some scientists are scornful, claiming that it’s all over for paranormal abilities. They point out that traditionally many things that were once considered supernatural we now know to be either imaginary or the product of perfectly normal, natural phenomena. The supernatural aspects were first dismissed by science, and that dismissal has been gradually accepted by the general public. So, for instance, lightning was once seen as an unearthly force, quite possibly propelled by the wrath of the gods. Although there are technical aspects of the way that lightning is produced that we still don’t understand, there are few people indeed who don’t accept that lightning is a purely physical phenomenon, an electrical effect on a tremendous scale. It may be quite unlike the kind of thing that comes out of the socket at home, but it’s electricity nonetheless.

If you look back at the remarkable summaries of thirteenth century  proto-science produced by natural philosopher and friar Roger Bacon in books like the Opus Majus, there are plenty of travelers’ tales that we would now dismiss out of hand and that we wouldn’t consider to be serious descriptions of the real world. You will find descriptions of tribes of wild Amazon female warriors and mysterious devices for seeing at a distance that go beyond even the capabilities of a telescope. There are many marvelous, if unlikely examples that were thought to be part of nature. For example, in his Letter Concerning the Marvelous Power of Art and of Nature and Concerning the Nullity of Magic, Bacon tells us:

as for instance that the Basilisk kills by sight alone, that the wolf makes a man hoarse if he sees him first, and that the hyena does not permit a dog to bark if he comes within its shadow ... Aristotle tells in the book De vegetabilibus that female palm trees mature ripe fruit through the odour of the males; and mares in certain countries are fertilized by the smell of horses ...

These were all serious beliefs back then, as close to science as anything came. But these beliefs have joined leprechauns and fairies in the ranks of ideas that were not just an incorrect observation of nature but totally fictitious. Just as these misinterpretations and fictions have disappeared from everyday life it is argued by some skeptics who can’t even be bothered to examine the evidence that telepathy, remote viewing, telekinesis and the like have also reached a stage where they should no longer be considered anything more than a fantasy or a historical misunderstanding.

I would suggest that we have not reached that stage while there are so many people who still think that there is something to be investigated, and while a host of experiments have thrown up evidence that at least needs careful examination. We ought to take a look at that evidence with fresh eyes, biased neither by enthusiasm for the topic nor by scientific blindness that refuses to even look at the evidence because we “know” there is nothing to see.

It has been interesting that the reviews I've had so far fall into three camps, which sadly reflect the fact that quite a lot of people aren't prepared to look with fresh eyes, but merely fall back on their old prejudices.

The first camp is the purely sceptical science camp. They have shown their position by simply ignoring the book. Of course any book can fail to garner reviews, but on past evidence of my books, this is unlikely to be the case entirely. So along with Richard Dawkins, this group is probably saying 'I am not interested in the evidence.' Then there's a second camp that gets it. Thank you to them. Finally, and most vocally in terms of reviews, are those who, as I put it above, are 'biassed by enthusiasm for the topic'. They accuse me of being a secret sceptic or say I unfairly make parapsychology sound in a bad way. This suggests, of course, there is something wrong with being sceptic. But scepticism, if applied properly is neutral. What they mean by 'sceptic' is someone who starts with the assumption there are no psi phenomena, which anyone actually reading the book would see is not the approach I took.

As for parapsychology being in a bad way, I think it is. We aren't seeing the big pieces of work like Rhine's and PEAR any more. And ever since Rhine, the field has been dogged by a combination of being unwilling to apply proper controls and by an obsession with looking for small statistical variations, rather than actual direct evidence. I'd suggest it does need an overhaul.

I can't say those who accuse me of being a secret sceptic upset me - but I do think it's funny that they can't see how thick the distorting goggles they themselves wear are.