The day a comet came to tea 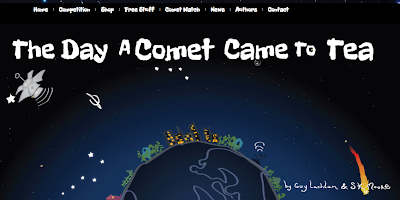 I found myself yesterday at the Royal Institution in London. The poor old RI has struggled to find its place over the last few years. It's understandable. With my heart I love this old pile and all it's historical baggage. I mean, this was where Faraday went from being a bookbinder's apprentice to one of the greatest physicists ever. He, of course, began the wonderful Christmas lectures for children that inspired so many would-be scientists, including me.

With my head, though, it is ludicrous that an establishment like this should be positioned in such a ritzy bit of real estate, in what must be amongst the most expensive districts of London. Think how much more outreach the RI could do if it sold up and bought a more flexible and accessible site. And yet...

One of the best things the RI used to do is to have regular events where the author of a new popular science book would talk about the subject. It's where I got my first chance to speak there, when A Brief History of Infinity came out. These events seemed to win all round - the punters got an interesting talk (mine was sold out), and the RI got a subsidy as the publisher would contribute financially/arrange drinks for the audience afterwards in exchange for being able to sell copies of the book. These events were stopped by the previous administration, which was a real shame.

However the new RI seems more open to different kinds of events, and yesterday I spoke at the launch of a book (currently in the form of an iPad app) for young children called The Day A Comet Came To Tea. It was a fun event in one of the RI's smaller rooms, but I have to say it worked particularly well because of the atmosphere. So maybe the heart ought to win, maybe it is worth keeping that wonderful old building.

As for the comet book, it's a great example of how you can introduce a touch of science into even the youngest children's books. It is story book - it doesn't attempt to heavy handedly educate (which is always a disaster in fiction), but it does give a hook to then talk about some interesting science, always the most important thing in getting children started.

I know the RI is in financial difficulties, but I think if it could do more with publishers again - physical and digital - in the future it would help both make its programme more inspiring and to keep it going in a rapidly changing world.