September 20, 2009
I often tweet about a new blog entry, but this is a rare example of a blog entry from something I've already put on Twitter.

I rather enjoy bad signs. But there's a certain hierarchy. It's not good enough that a bad sign should be in chalk, or run off on a laser printer. It should be expensively set or painted... like a sign on the side of van.

And then it has to be more than just a casual apostrophe. While I'm irritated by the greengrocer's apostrophe (the one used unnecessarily in plurals, such as carrot's or CD's), that's not enough to make a truly bad sign. 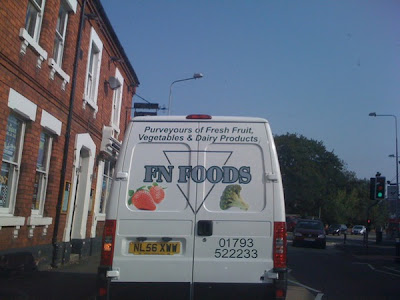 But this one, I feel, is a cracker. I was driving past and had to stop the car and jump out to take a photo, it was just so wonderful.

I'll purvey yours, if you purvey mine!