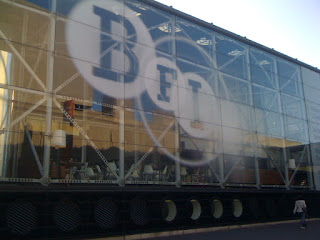 Yesterday was the IVCA Clarion Awards at the BFI in London. It spans a wide range of communication media - film, video, TV, radio, posters and... yes, books, all covering areas of social responsibility/ethics/environment.

I went along because my book Ecologic had been shortlisted in the book category. It was an interesting experience. Not too different from your standard awards ceremony as you see on TV, but winners were strongly discouraged from making a speech - they mostly just took the award, posed for a photo and got off, which meant it all went very briskly.

Books were towards the end of the list - while waiting with increasing tension, some of the clips shown of the visual entries were fascinating, particularly a series of short films in the style of The Sims for Holocaust Awareness - brilliantly done - and a viral campaign about child pregnancy. 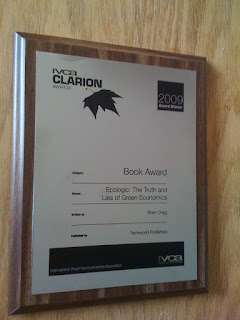 When it came to the books there were three other strong contenders, so I was genuinely shocked when Ecologic won and I had to go up and collect the award.

Sorry this is such a 'here is what I did' post, but I think I'm still slightly in shock.