September 10, 2009
It's not often I find myself strongly aligned with the Prince of Wales. In fact, it's such a rare occurence that I found it decidely difficult to type that previous sentence. Yet there are some aspects of his views on architecture that I can't help but applaud.

I'm not saying 'down with all modern stuff' - I like much modern architecture. Nor do I share his enthusiasm for neo-classical - I've always found classical architecture sterile and cold. But I do agree that those who are responsible for designing our domestic architecture should make more reference to architectural tradition. 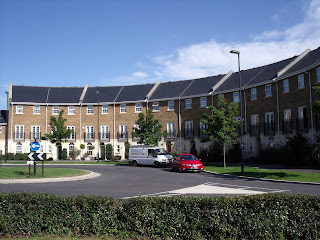 We now live on a modern development that is anything but a collection of oversized shoeboxes. With reckless abandon, whoever designed it has plundered architectural styles to produce something that works wonderfully well. Whether it's the rather French-looking house we now live in, or something that would fit well in a London street, they have used scale and style to make it a pleasure to look at and live in. Take, for instance, this pastiche London crescent near to us. I think it's delightful (it's a lot more distinguished live than it is in the photo).

However, a little further away on one of my dog walk routes is another development, somewhat older, where I really can't imagine what was going through the head of the architect. Because he or she decided to copy one of the worst 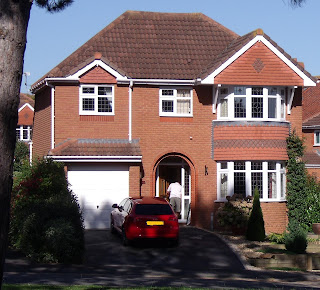 period domestic styles I can think of. The 1930s villa. (That's one in the picture - despite appearances, it is a modern house.) Why? I've nothing against these houses per se. I've lived in the real thing, and it was fine. But they're ugly, undistinguished and unnecessary when there's such a palette of styles to choose from.

Architects, by all means plunder the past. It's a great way to start a design for the future. But have some taste in the process, please.