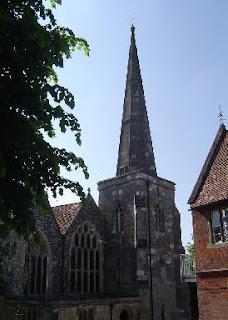 On Saturday I was in Salisbury, to sing at a concert of music by the composer Robin Highcock. In the ancient (if much 'improved') church of St Martin, I helped contribute to an evening of very accessible, well written music. If the performances weren't always spot on perfect - with one practice we typified the motto of most of the singing I seem to do, 'never knowingly over-rehearsed' - they still sounded uplifting and even thrilling. I was particularly taken by a stunning little number commissioned by a Catholic school with the eye-widening title By the Light of Burning Martyrs.

Now jump with me, if you will, to Sunday night when I watched the results show of the X-Factor. Leaving aside the competition itself, where the British public once more demonstrated what a poor judge of musical talent it is, the most interesting bit for me was judge Cheryl Cole's performance of her new single. 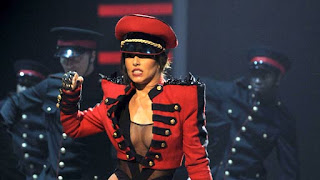 This was impressively and dramatically staged, with Ms Cole demonstrating some effective Madonna/St Vitus Dance style moves. However two things came across strongly. One, the song was rubbish. Simply boring. And two - she's not a particularly good singer. When you think about it, it's rather dangerous appearing on a show with lots of big voices, and proving to have a nice, but frankly underpowered one yourself. Of course, Ms Cole came from such a talent show, but in a group where individual vocal power wasn't essential. On her own, the limitations show.

It was inevitable that the show's presenter, the manically effusive Dermot O'Leary, should ask Simon Cowell what he thought of the performance. But it was rather sad that Mr Cowell, who likes to give the image of putting honesty above personal feeling, felt the need to go into sales promotion mode. If he'd just heard a contestant he would have ripped them apart for that performance. But no, he limited himself to saying it was an amazing performance or some such weasel words.

It's the way the world is, and I can't suggest any way of changing it, but I can't help compare the Saturday evening, where an audience of about 30 heard some superb compositions, occasionally sung extremely well, with Sunday's mediocre performance. The laurels and the cash go the opposite way to the talent. Maybe now I understand John and Edward.
church music music singing talent shows