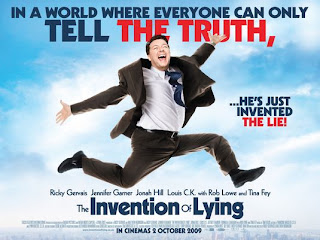 Don't you just hate people who write about movies they haven't seen? That's just what I'm about to do, though I have had reports. It's Ricky Gervais' latest vehicle, The Invention of Lying.

The moment I heard about the plotline it struck me, here is a five minute gag that won't stretch to a whole film. You can almost hear the mental process as the idea was developed.

It's made for the Beano or the Dandy. Only, after the initial delight, there's really not much more to be said. It's like the old X-ray specs fantasy. Wonderful for 2 minutes, but then what?

As that ultimate source of zen wisdom, Spiderman, once said 'With great power comes great responsibility.' If you've the power to get a movie into the local cinema and expect us to spend £7 or whatever to go and see it, you've got the responsibility to give us more than a five minute gag.