October 08, 2009
I live in a town that has few claims to fame. Leaving aside Diana Dors, Melinda Messenger and Billy Piper, for many years the name 'Swindon' was synonymous with steam engines.

The Swindon works of the Great Western Railway turned out some of the UK's most beautiful steam locomotives - and it's still an interesting sight, half designer outlet, half railway museum (with the National Trust's headquarters thrown in for good measure). 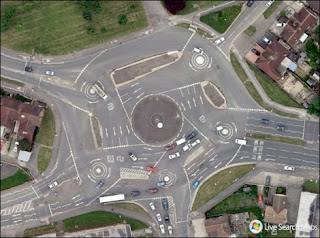 But now, if you ask someone what's the first thing that comes to mind when you mention Swindon, it's probably roundabouts. Not the funfair variety, but what are know as traffic circles in the US. Specifically, a monster of a roundabout (see photo) officially known as the Magic Roundabout.

But the inspiration for this blog post was another, more conventional roundabout on the busy dual carriageway that leads to junction 16 of the M4. It's one of those roundabouts where the traffic planners in their wisdom have decided that traffic lights are essential to keep the cars flowing. Now traffic planning is a fascinating task - taken as a whole, traffic has all the problems that make fluid flow nightmarish physics, including turbulence and waves. And that means it's difficult to get right, as was demonstrated this morning.

This morning the traffic lights on the roundabout were out of action. And the traffic was flowing better without them. You might expect that to be the case in the priority directions, the ones where the traffic naturally flows. But the bizarre thing was, the queues were shorter in the direction that the traffic lights are supposed to help cars get out from.

I'd say there were two reasons for this. One is that at the moment the lights are badly set. There's often a tailback across the roundabout, and the lights don't give long enough for the queue to disperse, so often they go from red to green to red without anything much getting through. The other is that drivers round here are much nicer than in the south east. This was really noticable when I first moved out west. They often let people out - and people power proved much better at managing the traffic than badly timed lights.