Posing with a pooch 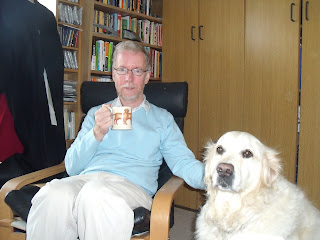 Every now and then I get a request for an interview to appear on a book blog or something similar - these are often great resources (and I make similar requests for popular science authors to contribute to www.popularscience.co.uk) so mostly I say yes.

One recent one was Writers Read, a rather neat idea where writers confess to what they are reading at the moment (in my case it was The House on the Strand and We Need to Talk about Kelvin).

This led on to a rather more unlikely contribution, as Marshal Zeringue, the owner of Writers Read, also has a blog called Coffee with a Canine, where contributors describe something of their relationship with their dog and, er, coffee. Sadly, Goldie rarely accompanies me to the coffee shop, so we had to make do with my domestic instant coffee fix, where she often comes and keeps me company. (In the picture she appears slightly radioactive. Apologies - she will keep fiddling around with the particle accelerator, and dogs aren't known for their expertise in nuclear physics.)

The mug, by the way, also portrays a golden retriever. So it's sort of coffee with a canine in canine. Or something.
coffee dogs writing