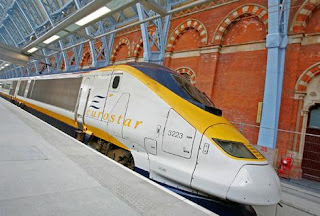 I'm just back from a visit to Almere in the Netherlands. For those not familiar with the place, it's a new town (pronounced roughly Ahl-meer-uh), about 30 minutes train ride from Amsterdam.

I was there to give a short talk based on Ecologic as part of a lecture evening on sustainability and eco-cities. As no great fan of flying (and it would have seemed a touch hypocritical, given the topic) I went by train.

On the whole the train travel worked very well, though I was amazed that I couldn't book a through ticket online, and ended up having to book with three separate agencies to get a train from Swindon to Almere. It also reflected badly on British rail pricing. To get from Swindon to London (80 miles) cost £109. From London to Brussels (193 miles) £88. and from Brussels to Almere (137 miles) £71. (All prices are for return journeys, and distances are by road, but give a reasonable indication.)

There's still something special about standing on St Pancras International station and seeing trains heading off to destinations like Paris and Brussels - it's commonplace in mainland Europe, but there was a frisson of excitement for me.

The event itself, run by the International New Town Institute, took place in Almere's starkly beautiful theatre on the waterfront. It was humbling as an English speaker. There were four lecturers and an audience of about 100. Most of the audience were Dutch, as were two of the lecturers, the moderator, the local mayor who took part in the closing discussion session, and the director of INTI who opened the event. But the whole thing was run effortlessly in English. I was particularly impressed by the presentation by architect Winy Maas, who managed to get through about 150 Powerpoint slides in 30 minutes - often almost subliminally - yet somehow it worked to get his message across.

On the way back, it struck me that Brussels has the most confusing railway stations in the world. Central station is a different station to Midi station... but Suid station and Midi station are the same place.