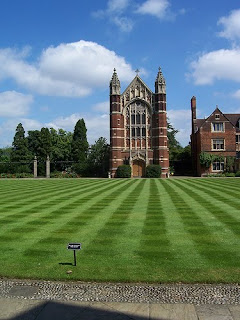 As fireworks bubble and squeak around us, and some really dodgy shops selling fireworks appear on the backstreets like fungus sprouting on a rotting tree, I am reminded of the most entertaining firework display I was ever involved in arranging. It was, to be honest, a practical joke.

When I was at university I was involved in a whole string of practical jokes. Not the 'silly prank that irritates a person' kind, but entertaining ones that ranged from the simplicity of placing a rubber pigeon (we couldn't get a seagull) in the chapel stalls above the Master's seat on Sea Sunday to the amazing pageantry of the fake Immersion of the High Professor ritual I have blogged about previously.

The firework stunt was like a military operation. At 1 in the morning on 5 November, a series of dark clothed pairs of individuals snuck out into the Old Court of Selwyn College (pictured). One of the pair had a bag of fireworks, each fitted with a timed fuse. The other had a bottle of water to douse any accidental pre-lighting. We set up the fireworks all around the court, with fuses timed from 5 minutes to 15. (The fuses were the rigid kind of firework lighter things that glow for ages - the scientists amongst us had had great fun experimenting with these to get the timings right.)

Once everyone was clear, a madman among us ran around the staircases, flinging bangers in to ensure we had a reasonable audience. And then it began.

From the safety of a friend's bedroom (I didn't have a room overlooking the court) we watched as the display began. Before long the staff were roused. And this was where it got very funny. They were convinced there was someone out there lighting these things. So you would see the heavy figures hurtling across the court at random every time a new firework went off. But of course there was never anyone there.

It might not have been the most sophisticated of practical jokes, but it did take a lot of preparation and some precision setting up. And watching officialdom running around, trying to catch the guilty parties, will stay with me forever.
bonfire night fireworks practical jokes university