Is sneakiness acceptable in a good cause?

November 18, 2009
I've just heard a deep philosophical conundrum on Heart FM. No, really. Their men have been growing moustaches for some charity event, and one of them (Jez of the Wiltshire breakfast show) has added a goatee to look less of a prat. The argument that then raged was had he still grown a moustache, or once you add a goatee, is it just part of a beard? I said it was deep.

This put me in a philosophical frame of mind, which accordingly got me a touch riled up when I receiv 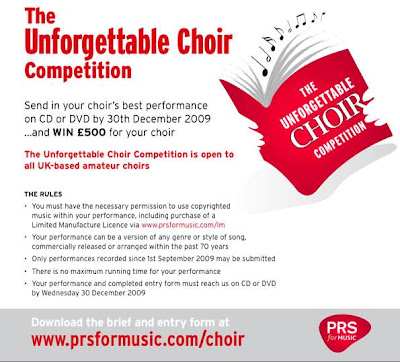 ed this advert from the Performing Rights Society, the UK group that collects royalties for composers and the like when their music is performed.

Now, I'm all in favour of the PRS. It's the musical equivalent of PLR, the wonderful organization that collects money for authors when books are borrowed from libraries. Composers should get their dues when their music is performed. But the reason this ad got me riled is that it seems to be sneakiness employed in a good cause.

At first sight there's nothing wrong with it. The PRS is running a competition for choirs - excellent. We should encourage singing. It's good fun and good for you. But if I were to enter I would have recorded a nice Tudorbethan anthem. And what does the small print say? 'Your performance can be a version of any genre or style of song, commercially released or arranged within the past 70 years.' Why that odd period of time? Because it makes sure the piece is still in copyright - so to be able to enter, you will have to pay a fee.

I'm sorry, that is sneaky. And really not good enough. Shame on you, PRS.
choirs church music rant recording singing