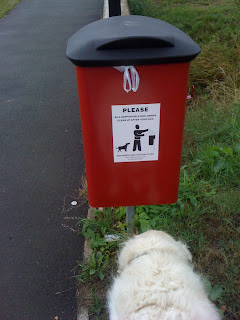 I tread carefully here, for I am about to suggest that young people are sometimes naughty. As I got berated for daring to say that yoof aren't necessarily as caring and sharing about the environment as the media tells us, I prepare myself for a hail of insults. But I ought to stress that I'm talking pre-teens here.

When I was young, the playground was in some ways a more dangerous place than today. Thinking back to the play equipment on the recreation ground that was wonderfully sited in a field that ajoined my garden when I was 0-11 (it has now been built over with houses - bad move, Rochdale Council), most of the apparatus would now be condemned as too dangerous to play on.

There was one piece of equipment that was actually removed as such while I was there - a long bar with seats on, suspended from above at both ends, so it rocked back and forth. The trouble with this was that the ends of the bar were roughly at head height, and it had a huge amount of momentum once going, so really was a deadly weapon. Rumour had it a girl was killed by one, though pre-teen rumours aren't awfully accurate.

Other devices that wouldn't be allowed now were the witches' hat - a conical metal frame, suspended from the point at the top that rotated and bumped - and a slide that must have been a good 15 feet high.

However, the health and safety elves missed the most unpleasant thing you got in the playground - bullies. Having bright red hair, I got my fair share of bullying, and back then those naughty young folk had to resort to simple pleasures like twisting your arm both ways at the same time (known politically incorrectly as a 'chinese burn'), ramming your face in the sandpit or doing unspeakable things with swings.

Although the dangerous equipment has gone, it strikes me that the playground bullies of today have a much more powerful weapon than the ones we were subjected to. As I walk my dog I pass several playgrounds, which are all usefully provided with dog poo bins, like the one in the illustration. For me these are very useful - it saves carrying the unwanted output all the way home. But they have the potential to be the naughty young person's friend.

I think it's fair to say, that if anyone was held with their face in close proximity to one of these bins for more than a few seconds, they would find it very difficult not to throw up. Now there's a weapon of choice. Thankfully, I am yet to see it in use - the potential users hopefully don't have the imagination to employ it. Even so, I can't help but shudder whenever I use one of these useful devices and think how it might have been.
bullying children playgrounds