Will you dance your way to psychic sex? 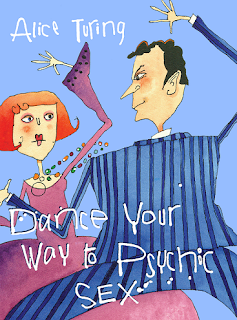 There are times when it’s good to read something completely different. It clears out the mental pipes. And it’s hard to imagine anything further from my usual diet of non-fiction with the occasional murder mystery or science fiction novel than Dance Your Way to Psychic Sex. It’s certainly a title that grabs the attention – and it gives a focus that won’t be lost throughout the book. This is the kind of read where you just want to go on and take in a little bit more of the strange and wonderful revelations.

Set largely in Hebden Bridge, a small town in West Yorkshire, this is anything but a Hovis commercial book. The characters are much more metropolitan than rural tyke. Although surrounded by other quirky individuals, at the heart of the story are two damaged characters, Henrietta and Leo. She has OCD, is a single mother and is escaping from a bad experience in a cult to find some kind of peace and stability in an everday working life. He is a magician, specializing in mind tricks, confused and bitter as a result of a strange upbringing by his magician grandfather, unable to admit his own sexuality.

The other star of the book is psychic dancing and an associated fictional book, cunningly called That Book (as in ‘have you read That Book?’). That Book seems to be woffly New Age guff (we read a few extracts), but it has inspired psychic dancing, a phenomenon that is sweeping the nation, what appears to be a strange and exciting mental linkage between two individuals as they make synchronized movements, waving hands in the air.

The real craft that Alice Turing effortlessly employs is to have two main characters who initially aren’t particularly likeable – quite the reverse – yet despite their continued flaws, they win us over. We want them to succeed, yet they seem to be set on tracks heading for an inevitable train wreck. It’s a recipe for page turning, as Turing piles on the pressure and suddenly these characters become something close to those irritating friends that are always doing the wrong thing, but you still love.

Something I particularly enjoyed was the interweaving of a thread that really makes you think. A minor character who is pretty much Derren Brown (Darryl Black) is set up as a rival for Leo, a success on TV because he combines his mental act with debunking those who claim to have true psychic powers. Turing subtly examines just why people want to believe so much, and starts questions in the mind about whether it is better to allow people the comfort of their beliefs or to expose what is really happening.

I ought to put in a small readership warning – the book does contain a few explicit scenes, so definitely isn’t for a young audience.

The fascinating thing about reading Dance Your Way is that part of you really wants psychic dancing to be true, wants strangers to start interacting with each other in the street – and yet Turing shows the painful practical limitations of a world of joy. It’s funny, bitter-sweet and disturbing in equal parts. It isn’t perfectly crafted – the writing can be quite raw – but that’s part of its attraction. It reminds me of those trays that come with poppadums in Indian restaurants – just watch out for the lime pickle. We’ve got flawed characters we care about, a plot that takes entertainingly surprising twists and turns, and a central concept that is both clever and thought-provoking. It’s a recipe for success. A fascinating novel that has already been published in German but is coming out for the first time now in the original English, I’d recommend it to anyone who wants a novel that’s both entertaining and a feast for the mind.

Now available at Amazon.co.uk
Using these links earns us commission at no cost to you
book reviews fiction review reviews